Everyone, I am absolutely thrilled to host Sarah Bryson today on her virtual book tour! Ms. Bryson has been kind enough to grant me an interview. Her book is available for pre-order in the United States: http://amzn.to/2pqTgi2 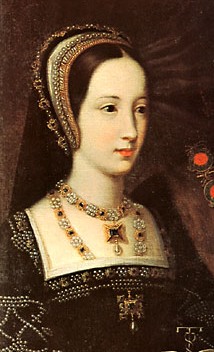 Why, “La Reine Blanche?” What significance does that have for Mary?
La Reine Blanche is French and translates to The White Queen. After Mary’s husband, King Louis XII of France, died, Mary was required to shut herself away at the Hotel du Cluny for a period of forty days in order to establish if she was pregnant or not. If she was, and she was carrying a son, it would be her child that would have inherited the throne. It was tradition that the dowager queen wore white, the French colour of mourning. The chambers in which Mary was shut away in were called La chamber de la Reine Blanche, the chamber of the white queen. This period in Mary’s life was a very significant time as it was then, alone and without support that Mary took her life into her own hands and really shaped her own future. Thus La Reine Blanche, or The White Queen, is very significant for Mary.

What intrigues you about Mary?
I’ve always been quite interested in Mary Tudor. She is one of those figures in history that you read about as a side note, the sister of Henry VIII, a woman adamantly against Anne Boleyn and that’s about all. I wanted to know more about her. Who was she? What was the relationship with her brother like? Why was she so venomously against Anne Boleyn becoming Queen? How did she marry without her brother’s permission and get away with it? The more I read about Mary the more intrigued I became. Reading her letters was a wonderful and fascinating insight into the life of quite a remarkable and very interesting woman.
What were some of the more surprising things you learned about Mary?
I think what surprised me the most was just how much, in the early years of her life, Mary was able to influence and manoeuvre her brother into getting what she wanted. It’s important to remember that in the Tudor age men were the dominant sex. The male was the head of the household, and the king, God’s representative on earth. Women were subject to their husbands, fathers, and brothers; and yet Mary was able to convince her brother to let her get away with marrying a man not only far beneath her station in life but without her brother’s permission. Mary was deeply loved by her brother and she was able to use this and her great ability to manipulate him through her letters, to get her heart’s desire.
Was there a moment in particular that impacted you personally whilst researching Mary’s life?
Mary’s death hit me quite hard, much more than I expected. Here was a woman who had lived a great deal of her life in the spotlight, as a beautiful young Princess, a highly sought after bride, a French Queen and beloved sister to a King and yet in the later years of her life she faded into the background. With Anne Boleyn’s ascension Mary’s star began to fade. In the last year of her life she was very sick and had removed herself completely from court refusing to acknowledge Anne. She died at Westhorpe with little pomp and her death was barely mentioned across Europe. It was quite a sad ending for a woman who had been so strong and had been such an important part of the Tudor court.
What was difficult about researching this book?
For me personally the most difficult thing was finding time to write! I work full time and I am also a wife and mother so I have a lot on my plate. It was important for me to make time to sit down and write. The passion and desire was there I just lacked time!
What do you hope readers will take away from, “La Reine Blanche?”
I hope that people will see what a strong and passionate woman Mary was. Mary was a woman who in an age dominated by men was able to maneuverer herself to get what she wanted. She was strong and inspiring and I hope to challenge the misconception that Mary was meek and docile and had no role in Tudor history.

If you could dine with Mary, what would you wish to express to her?
I think I would just thank her for being such an inspiration in my life. I’d tell her about women’s struggles throughout the centuries, the suffrage movement in England and how in many countries woman are allowed to vote, have equal rights and are free and independent – a far cry from the times in which she lived!
What was most rewarding for you when working on this biography?
For me it was being able to bring Mary’s life to the modern day. She is a very overshadowed figure in Tudor history and yet she was quite an inspirational woman. People know about Henry VIII, Anne Boleyn, Thomas Cromwell and other famous figures of the Tudor age, but Mary is one of those figures always in the background. To be able to write this book, using Mary’s own letters, has been amazing and I really hope that people will read about Mary’s life and be influenced by the woman that she was.
What other books would you recommend to people who wish to learn more about Mary?
Unfortunately not a great deal has been written about Mary. However I would suggest ‘Sisters to the King’ by Maria Perry which examines both Mary and Margaret Tudor’s lives. Also ‘Mary Tudor: The White Queen’ by Walter C. Richardson. This is an old book but still an interesting read with lots of information.
What are you reading right now?
I’ve just finished Nathen Amin’s book ‘House of Beaufort: The Bastard Line that Captured the Crown’. It was a fascinating book that explored the Beaufort line, from the illegitimate children of John of Gaunt with his mistress and then wife Katherine Swynford, who were eventually legitimized to the last legitimate heir, Margaret Beaufort, mother of King Henry VII. I would highly recommend it!

What is your next project?
I can’t say too much, however I am currently researching a very fascinating family from the 15th and  16th century!
What encouragement could you give to girls and young ladies about becoming authors and historians?
I would say to just keep writing and don’t give up. Write whenever you can as often as you can, even if it’s just a mess of words on the page; get those thoughts and ideas out. Don’t listen to people who want to criticise or put you down. Your true friends will love and support you so keep on writing!