Maria was born 15 September 1505 in Brussels after a birth that endangered her mother Juana‘s life. Maria was the fifth child and third daughter of Juana and Philip the Handsome. Maria was named after her paternal grandmother, Maria of Burgundy. After the death of her father Philip in 1506, Maria stayed at the court of her paternal Aunt Margaret in Mechelen. She was raised alongside her sisters Eleonore and Isabella, and with her older brother Charles V.  Maria and her two older sisters were educated by Henry Bredemers in music, and received an overall fine education from the various tutors Aunt Margaret employed to educate the girls.

Maria’s older brother Ferdinand, through the machinations of their paternal grandfather Holy Roman Emperor Maximilian I, was betrothed to Anne, daughter King Vladislav II of Bohemia and Hungary. The conclusion of the marital contract occurred on 20 March 1506, ten days after Ferdinand turned three years old. During the same negotiations, it was decided that Maria would marry Vladislav’s unborn child if the child turned out to be male. On 1 July 1506, a baby boy was born to Vladislav, and the marriage negotiations for Maria and the infant prince of Bohemia-Hungary were completed.

On 22 July 1515, the double wedding took place. Anne and Maria remained at the palace in Vienna for several years because they were both merely children, as were their new spouses. Maria was elevated to Queen Consort of Bohemia and Hungary in 1516 when her father-in-law died and Maria’s ten-year-old husband Ludwig became King of Bohemia and Hungary. In 1517, Maria and Anne were moved to Innsbruck to continue their education. Maria’s love of hunting began around this time, and was something over which she and her husband bonded. 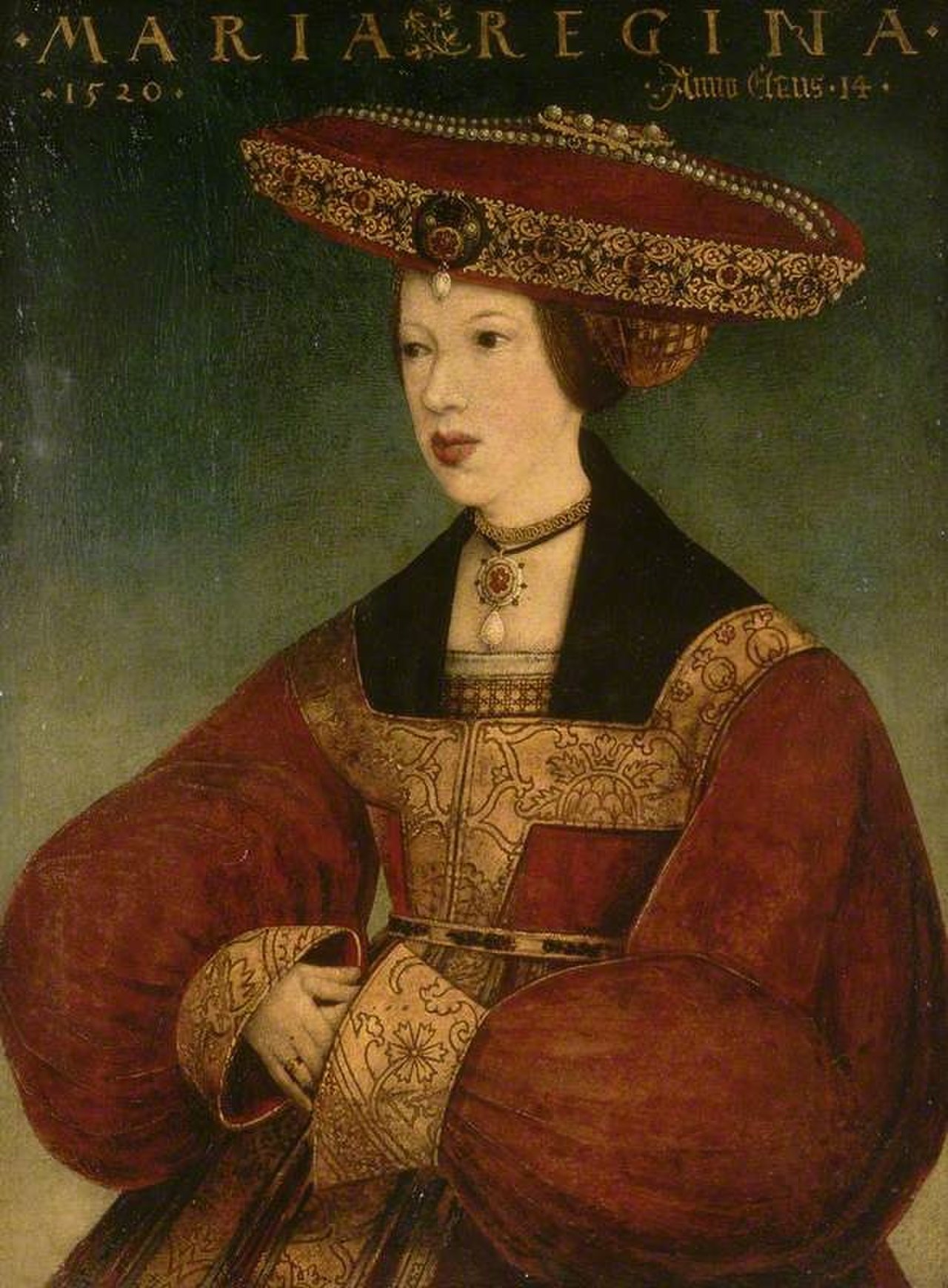 In 1521, Maria finally went to live with her husband Ludwig in Bratislava. Maria was not noted for being a beauty, but rather had a more masculine facial structure. She inherited the over-large Habsburg jaw and lower lip. She had a lovely disposition, was charming, had a firm command of diplomacy, and was quite intelligent, which more than made up for any of Maria’s perceived shortcomings. She and her husband Ludwig fell intensely, passionately in love upon meeting. Their marriage was joyful, although they did not produce any children.

A 19th century depiction of the double marriage between Maria and Ludwig, and of Ferdinand and Anna; by Vaclav Brozik.

While at court in Bratislava, Maria’s education continued under Margrave Georg von Baden. It was during her time with her husband Ludwig that Maria likely came into the knowledge of Lutheranism, and sympathized with Lutherans. Maria and her husband were able to indulge their intellectual pursuits and their shared enjoyment of hunting because Ludwig was still underage. A regency was in place for Hungary and Bohemia.

During the regency, there were effectively two political parties at court: pro-Habsburg and pro-Hungary. Ludwig slowly carved out his own role as he aged, heavily relying on Maria’s prudent input when navigating the delicate balance with the Hungarian magnates. Ludwig, with Maria’s assistance, was largely successful until 1526. The blissful life of Maria and Ludwig came crashing to an end in August of that year.

Earlier in 1526, the Hungarian magnates virtually revolted against Ludwig’s rule because it had become too pro-Habsburg. It is not specifically known how much Maria was aware of what her powerful brother Holy Roman Emperor Charles V had planned for Hungary and Bohemia. Either way, when the Turkish Empire came knocking with their military, neither of Maria’s brothers sent help.

on 29 August 1526 at the Battle of Mohacs, Maria’s husband was killed while retreating. The majority of the Hungarian high nobility and political leaders were massacred during the battle in southern Hungary, as well. Maria, all of twenty-one-years old, was a widow.

Ludwig II of Bohemia and Hungary by Hans Krell c. 1522.

Days later, around 3 September 1526, a flood of refugees from Turkish-occupied Hungary headed toward the fortified city of Bratislava. Maria, now Dowager Queen of Hungary and Bohemia, fled to Bratislava as well with a small coterie of surviving Hungarian officials. While in Bratislava, Maria receive a letter and booklet of psalms from Martin Luther to comfort her during her early widowhood.

Maria’s brother Ferdinand caught wind of Maria’s correspondence with Luther. Ferdinand sent Maria acerbic letters to Maria about her involvement with Luther, pressing Maria to remain faithful to the Catholic church. Maria ultimately capitulates for the sake of maintaining the Habsburgs and Holy Roman Empire, and never again showed any public sympathy for Martin Luther or interest in his teachings.

Hungary was effectively divided into two parts, with Maria and the Habsburgs taking over the western region which is now part of Slovakia. Ferdinand was elected king over this portion of Hungary and Bohemia, and Maria was appointed as Regent of Hungary.

Ferdinand wished to marry off Maria to another eligible ruler, and so approached James V of Scotland. Maria, who genuinely mourned the death of her husband Ludwig, refused to cooperate with Ferdinand’s wishes and the Scottish plan was abandoned. There was another attempt to wed Maria to the Count Palatine, but she also refused this. Her nice Dorothea of Denmark wound up marrying him instead. Maria never remarried, and remained dressed in mourning clothes for the rest of her life. She also maintained the title of Dowager Queen of Hungary until her death.

Maria von Habsburg c. 1522 by Hans Krell, likely a companion portrait to the one above of her husband Ludwig II.

On 3 January 1531, Maria, now thirty-one-years old, was appointed Regent of the Low Countries by her brother Charles V. Charles recognized his sister’s intelligence and political acumen when choosing who to appoint as regent. He believed in her capabilites in administering the territory’s finances and prudence in the face of warfare, and knew that Maria would remain loyal to Charles and the overall Habsburg cause. Maria, in turn, always asserted the interests of the Low Countries when she needed.

The Low Countries flourished under Maria. She invited artists such as Titian to her court, and helped bolster the port of Antwerp’s position as an international commercial port. She added an art gallery to her palace in Brussels, and invited intellectuals to her court.

Maria took guardianship of her nieces Dorothea and Christina of Denmark and Norway after their mother, Maria’s sister, Isabella died. Maria assisted in making marital arrangements for the sisters. To those familiar with English history, in 1538 Maria opposed the match of Christina of Denmark to Henry VIII of England. Charles pressed Maria to negotiate with Henry, but Maria dithered. Henry was later excommunicated from the Catholic church, and that put an end to the discussion.

Maria’s political achievements include establishing a central government for the seventeen Dutch provinces, although this would fall apart by the end of the century. Additionally, she had several fortifications built and managed to repel and defend against French invasion. In the 1540s, Maria was under attack by her brother-in-law Francis I of France, and her neighbor Wilhelm of Cleves. Francis and Wilhelm were allied through the marriage of Francis’ niece to Wilhelm. Maria was able to defeat the French at the 1542 Battle of Luxembourg, though she was less successful later that year in keeping her territory safe from an invasion by Wilhelm of Cleves.

Later in the 1540s, Maria successfully mediated a dispute over who would become the next Holy Roman Emperor. Maria was closest to Charles out of her other sisters, and possibly also Ferdinand. Ferdinand was frequently present at Maria’s court when Charles could not be, and the three often would meet there to discuss their machinations and administration of the vast territory over which their family ruled. Charles briefly wished for his son Phillip to become the next Holy Roman Emperor, but that plot was abandoned with the assistance of Maria in favor of their brother Ferdinand.

Maria retired from her regency at around the same time that Charles began abdicating his various thrones in favor of his son Philip and brother Ferdinand. Maria decided to move to Castile, the kingdom of her mother who had recently died, but retained permission to return to the Low Countries if she could not adapt to the customs of Castile. Eleonore, widow of Francis I, Maria, and Charles V sailed together in September 1556 from Ghent to Castile.

After moving to Castile, Maria and Eleonore visited with Charles. Sadly, Eleonore died in her arms in February 1558. Charles fell ill in August, and asked Maria to resume her position as Regent of the Low Countries. In September 1558, during her preparations to leave, Maria learned that Charles died. Maria herself died weeks later on 18 October 1558.