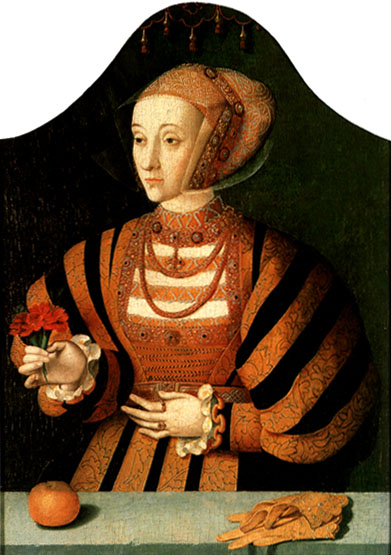 From the Workshop of Barthel Bruyn, after 1560, via Wikimedia Commons

Anne of Cleves, born in 1515 in Germanic territories of the Holy Roman Empire, married Henry VIII of England in 1540. Her marriage to the King lasted only about six months before he divorced her. Due to Anne’s congeniality, Henry settled a good income and several properties on Anne. She remained in England until her death in 1557, where she enjoyed a relationship with Mary I of England, who was only six months Anne’s junior, and with Elizabeth I of England. Elizabeth and Anne rode together in the chariot just after Mary I’s during Mary’s triumphant ride through London as the new queen. Sadly, Anne passed away just over a year before she saw her other stepdaughter, Elizabeth I, become queen.

Anna of Cleves, born in 1552, was the daughter of Wilhelm V of Cleves. Wilhelm V was Anne’s younger brother. As Anne’s niece, Anna of Cleves was raised in the royal court at Düβeldorf by her other aunt, Amelia. Amelia saw to it that Anna of Cleves was brought up in the Lutheran faith. Anna of Cleves would go on to marry the Count Palatine, Philip Louis of Neuburg, in 1574. She gave birth to eight children, four of whom not only survived to adulthood, but were married. Anna died in October 1632 at the age of 80.

Anna, Duchess of Prussia, was born in 1576 to Albert Frederick of Prussia and Marie Eleonore of Cleves, making the Duchess of Prussia Anne of Cleves’ great-niece. The Duchess was the expected heir to her father, and as such, would go on to make an important dynastic marriage at the age of 22. More revered for her intellect than her looks, the Duchess’ marriage brought together the territories of Prussia (and Jülich-Cleve-Berg) and Brandenburg. At the time, Prussia was a ducal territory under the crown of Poland. She went on to have eight children, four of which survived to adulthood. The Duchess died at the age of 49 in 1625.

Author’s commentary: This article was frustrating to write, in some ways. I was eager to research these Annes of Cleves and bring them to life for the reader. It was difficult to find solid, reliable information about not just these two Annes, but all Annes of Cleves save for the fourth wife of Henry VIII of England. What a fine shame it is that most of what we know about these women is that they were born, became wives, then mothers, then died!

1. Gloriana and the Green Ruby

One thought on “The Annes of Cleves, Part II”