Tyge Ottensen Brahe, or Tycho Brahe as he is usually known to English speakers, was born on 14 December 1546 on the Danish peninsula of Skania. Tycho was born into a noble family and benefited from an excellent education. He was very passionate about mathematics, which caused him grave disfigurement. How, exactly, does one become disfigured because of mathematics? Why, by challenging someone to a duel to settle the matter of who was  a better mathematician!

On that fateful day of 29 December 1566, shortly after Tycho turned 20 years old, he and his cousin were drinking at an engagement party when they began arguing over who was better at math. To resolve their differences, Tycho and his compatriot chose to duel with their swords. Not only would the pair engage in a drunken duel, they chose so to do at night, in the dark. Tycho’s nose was badly damaged, and his forehead severely cut. He recovered from his injuries, but wore a prosthetic nose the rest of his life. His day-to-day nose was usually a brass model, but he also had gold and silver noses for special occasions. When looking closely at portraits of Tycho, one can see a mark across the bridge of his nose, showing where his real nose ended. 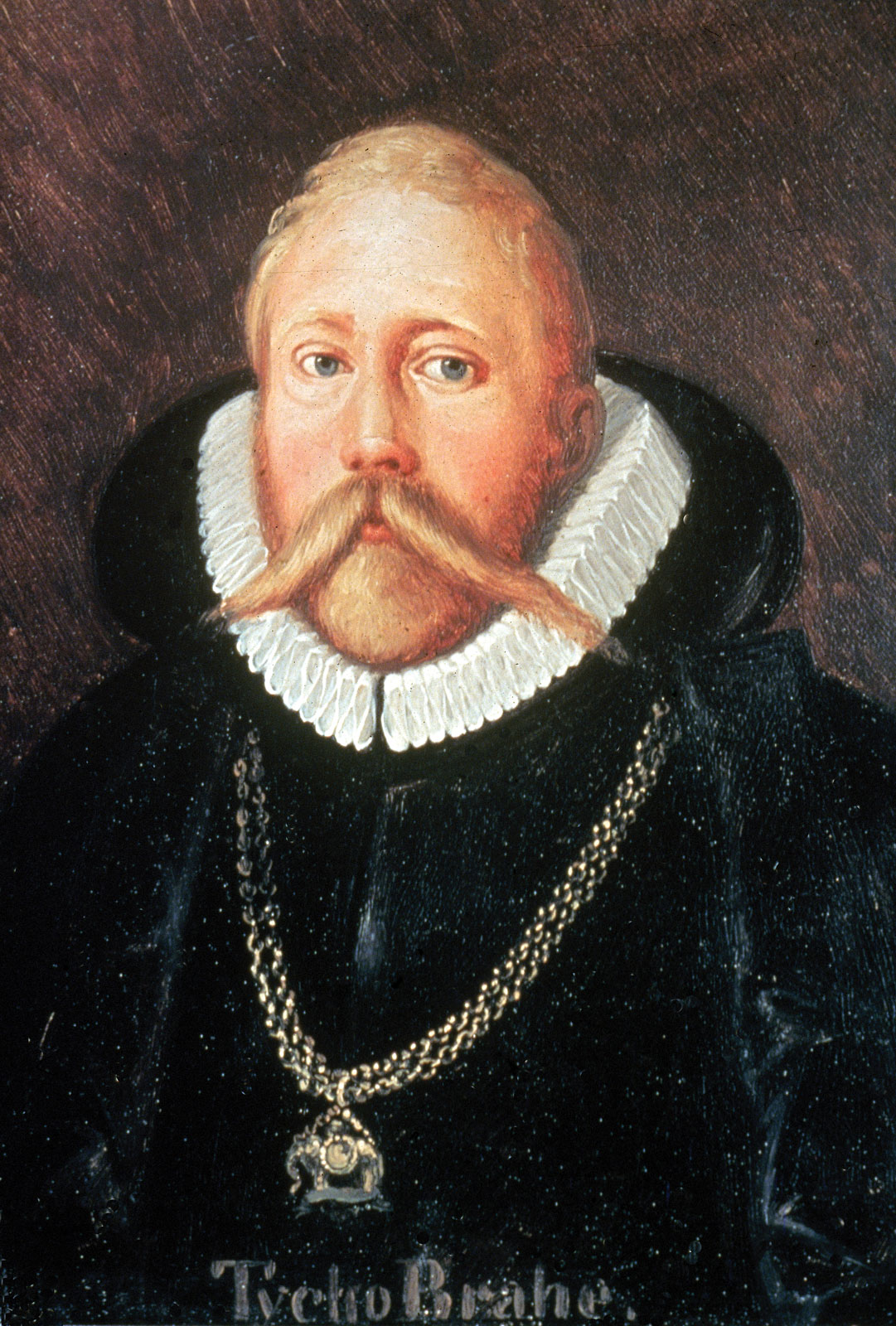 Turning to Tycho’s intellectual pursuits, he first became interested in astronomy during his time at the University of Copenhagen. Tycho began attending Copenhagen when he was twelve years old. In August 1560, right before his fourteenth birthday, Tycho beheld the total solar eclipse. Intrigued and inspired, he began reading as much about astronomy as he could. He later went on a tour around Europe at the behest of his father, who wanted Tycho to study law and become a civil servant. Tycho convinced his mentor with whom he traveled to allow Tycho to continue his pursuit of astronomy, as well. The pair wound up at the University of Leipzig in March 1562, where Tycho observed the conjunction of Saturn and Jupiter.

Tycho next went to the University of Rostock in 1566. It was here that he lost his nose, as discussed above. He traveled to several other cities in the late 1560s. Tycho finally returned home in late 1570 because his father was quite ill. His father died in early 1571. Tycho’s uncle helped him build a laboratory, and it wasn’t long until King Frederick II of Denmark, father-in-law to James I & VI, decided to have an observatory built at the Uraniborg castle for Tycho so he could continue his studies of the night sky. The Uraniborg observatory was built on the island Hven, not far off the coast of Copenhagen. Hven is part of modern-day Sweden.

Tycho entered into a morganatic marriage with Kirsten Jorgendatter, a commoner.  A morganatic marriage is between people of unequal social rank, and the couple’s children is usually denied their noble father’s titles and inheritance. Tycho’s family was furious, but Frederick II turned a blind eye. Frederick had been in love with Anne of Hardenberg, but unable to marry her due to her social rank. After an attempt at pursuing Elizabeth I of England, Frederick married Sophia of Mecklenburg-Guestrow.  Tycho and Kirsten were together for thirty years, having eight children together.

In November 1572, Tycho was at the Uraniborg. He observed a supernova in the constellation Cassiopeia, and published a booklet about his findings in 1573. The booklet was called, “De nova stella,” or “About the New Star.” It is from this booklet title that scientists developed the term “supernova”. Scientists across Europe took note of Tycho’s discovery and methods. Throughout the 1570s and 1580s, Tycho continued his observations. His younger sister Sophia acted as his assistant.

Tycho continued to develop his observatory, which he named the Stjerneborg. He was known to have a tame, pet elk on Hven, and employed a dwarf named Jepp as a jester. Tycho believed Jepp had some psychic powers.  The elk met its demise after consuming a quantity of beer, which it enjoyed drinking without any prodding from anyone. It stumbled off and died from a drunken accident.

In 1588, Frederick II died. His young son, all of 11 years old, became King of Denmark. A regency was established, and within ten years, Tycho had to abandon Hven. Tycho eventually made his way to Prague, where he encountered Johannes Kepler. He and Kepler developed a catalogue of stars, although Kepler did not fully agree with all of Tycho’s theories.

Tycho died in 1601 in Prague, having fallen ill after a banquet. There persisted for centuries a rumor that Tycho was murdered, possibly by Kepler, through mercury poisoning. In 2010, Danish authorities granted permission for testing to be carried out on Tycho’s remains. There were no poisonous levels of anything in Tycho’s body, debunking the myth that he was murdered. However, his hair did contain massive levels of gold. It is possible that gold poisoning contributed to his death over time.

Tycho Brahe produced a massive body of work during his lifetime. His research propelled forward the science of astronomy. Tycho’s work also impacted the understanding of physics. His passions included alchemy and studying medicine.

It is difficult for me, a non-scientist, to express the importance of Tycho’s work. I encourage you to find out more about him.