Katharina von Bora died on 20 December 1552, at the age of 53 years old. Katharina was possibly born 29 January 1499, although there are no primary sources to enforce this date. It is not known exactly who Katharina’s parents were, but is generally agreed that she came from a petty noble Saxon family. Katharina was sent to a Benedictine cloister in Brehna in 1504. Around the age of ten, Katharina went to Marienthron, where her aunt was a nun.

It is possible that Katharina was either a second or subsequent daughter, or that her parents could not afford a dowry for her to marry properly. It was common in pre-Reformation Germany for girls to be sent to convents if the parents could not marry them off. This was a practice which continued until the various abbeys, convents, and monasteries around Germany were shut down and the religious persons expelled due to Lutheranism.

In the early 1520s, Katharina and some of her fellow nuns had grown fed up with religious life. The convent of Marienthron would not be closed until at least the late 1530s, but Katharina was ready to leave. She and her fellow rebel nuns contacted Martin Luther, asking him to help them escape. The day before Easter 1423, Katharina and her friends escaped in a herring cart driven by a friend of Luther’s. They were taken to Wittenberg. 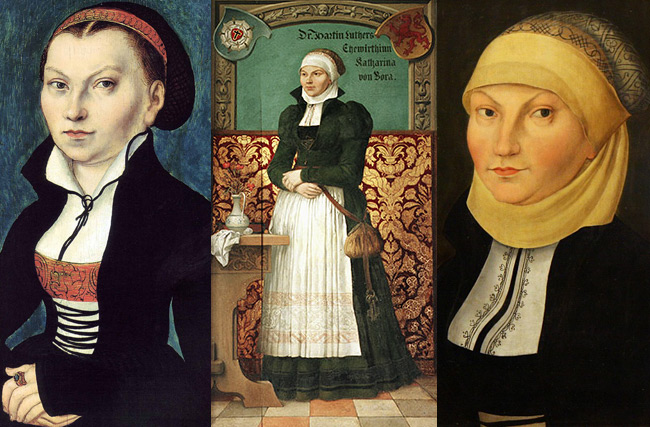 Katharina desired a husband, and made it clear that she would accept one of two men only. Martin Luther finally gave in, and the pair wed on 13 June 1525. From that point on, Katy, as Luther called her, threw all of her energy into running a hospitable home for herself, Luther, and their guests. Katy bore six children between June 1526 and December 1534, and had at least one miscarriage. Four of her six children survived to adulthood.

Katy and her husband were gifted property in Wittenberg which formerly belonged to Augustinian friars. Katy regularly brewed beer, which was common for 16th century German woman to do for their individual households, but Katy so did on a much larger scale. The couple provided places to rest for visitors, and Katy occasionally set up hospitals within the property to care for the sick and unwell. It is thought that Katy’s second child and first daughter, Elisabeth, died at the age of eight months because of Katy’s exposure to the Black Death. Of Elisabeth’s death, Katy wrote,

“The good Lord gave me a little girl, the sweet little Elisabeth. I am happy and grateful to the Lord! Here, the plague is dead and buried. However, it seemed as if the terrible scourge had marked the child, even before she was born… At the cemetery, you can still see the tombstone with the simple inscription: Hic dormit Elisabeth, filiola Martini Lutheri, 1528.”

Katy managed the estate’s finances quite ably, and increased its wealth through a variety of avenues. She and her husband served as the living example of Lutheran, godly marriage. They even raised four orphans.

Katy’s life became extremely difficult after Martin Luther died in 1546, on the eve of the Schmalkaldic War. Luther left all of the land he possessed to Katy, but unfortunately as a woman, Katy could not inherit the property. In 1547, she and her children first fled to Magdeburg and then Braunschweig (Brunswick) to avoid the carnage of the Schmalkaldic War. The war saw the defeat of their protector, Elector Johann Friedrich of Saxony, who was Anna of Cleves’ brother-in-law. Johann Friedrich’s wife and Anna’s sister Sybylla was known to correspond with Luther herself.

After returning to Wittenberg, it was clear that Katy could not live in her marital home anymore. The buildings were destroyed, and only a shadow of her former industry and husbandry pursuits remained. She lived in poverty until 1552, when she died on 20 December.