Fashion has had innumerable iterations throughout the centuries, with the Renaissance bringing about not just changes in thinking, art and education, but also clothing style. And along with new clothing styles came sumptuary laws, which created strict visual distinctions between the different classes. There were also restrictions on who could wear which fabrics. 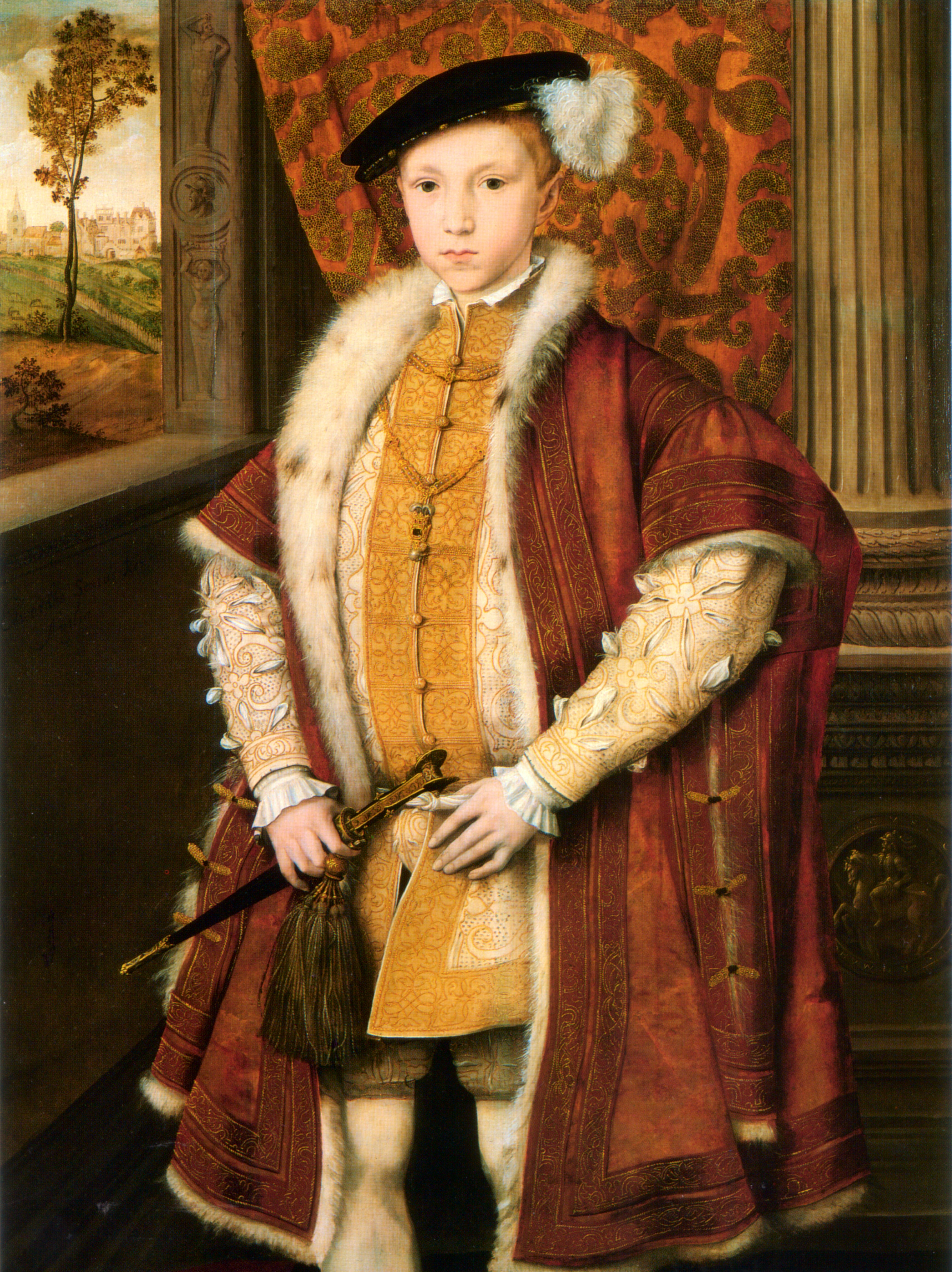 The lower classes wore linen or wool; cotton was not allowed to be imported into England so as to protect the wool trade. The upper classes enjoyed the luxury of silk, brocade, velvet, and satin. Henry VIII passed his first sumptuary laws in 1510, shortly after ascending the throne. Given that clothing was an automatic identifier of who was what class, Henry wished to keep the status quo in place, despite the rising wealth of the merchant class. Mary I continued this trend, as did Elizabeth I. These same sumptuary laws also allowed the Tudor monarchs to collect fines and bestow special status on favorites.

Along with which types of cloth could be worn by whom, sumptuary laws dictated what length the cloth could be and what colors. Purple was absolutely reserved for royalty, as were several types of fur, such as ermine. Aside from providing visual identifications of who was who, it helped keep money in England because fewer people were buying expensive, imported fabrics.

French fashions were very popular at the Tudor court and favored by the women. Anne Boleyn, the second wife of Henry VIII, wore a French hood, which became fashionable. The open, square neckline of French gowns was a popular and permissible way for an English woman to show some skin. Wealthy English women would wear a shift underneath a tight corset, with an outer skirt or kirtle, and a petticoat or under skirt that would be visible through a large parting in the outer skirt. To give shape to the heavy skirts, women would wear bum rolls around their hips and farthingales. Bum rolls were cushions worn about the hips to make a woman’s figure seem shapelier, while farthingales were a precursor to the hoop skirt, featuring up to three wooden hoops around the bottom that gave a bell shape to a woman’s inner and outer skirts. Farthingales worn by very wealthy women could be made of brightly coloured fabrics, although the farthingale itself was not meant to be seen. It should be noted that farthingales are of Spanish origin and were first introduced into England by Katherine of Aragon, Henry VIII’s first wife. Women of the lower classes were much more plainly dressed and had fewer layers, in part to allow them to move more freely for labor purposes and also because they did not have servants to help them dress. 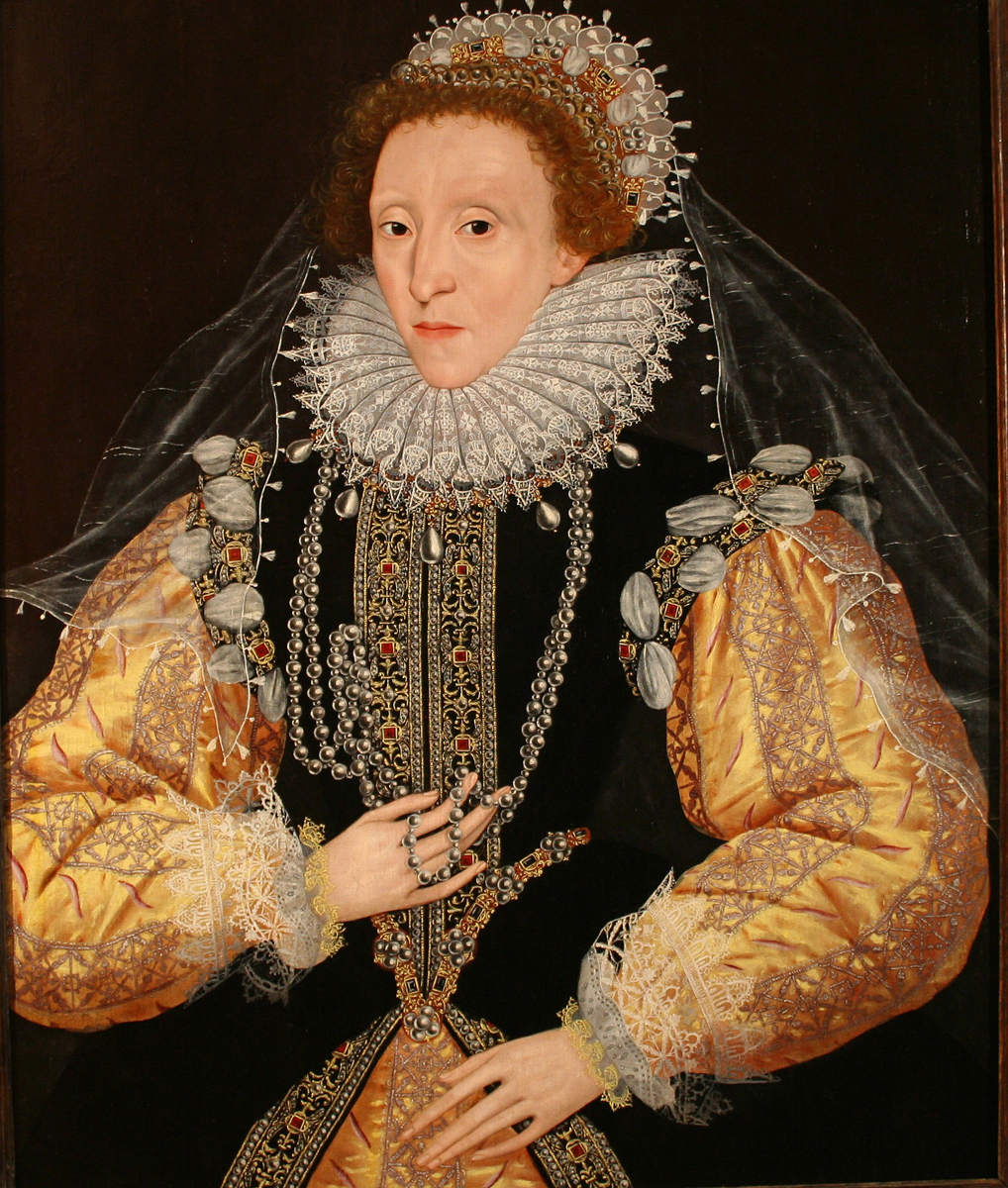 Men’s clothing for the upper classes was no less complicated than women’s. They had their shirt, which was a long-sleeved undershirt, over which was worn a doublet and jerkin, a close-fitting jacket. They wore puffy upper hose that at times featured a codpiece. The purpose of a codpiece was to provide a man with more modesty, but also served as an extra pocket.

Both genders wore knee-high hose that was held up with garters. Sleeves for both men’s and women’s clothing were removable, allowing a look to be changed slightly for a relatively lesser expense than a completely new piece of clothing. Katheryn Howard, Henry VIII’s fifth wife, had given a previous partner of hers a pair of sleeves as a gift.

Necklines slowly crept higher during the reigns of Mary I and Elizabeth I. Beginning in around the 1550s, the ruff most commonly associated with Elizabeth became fashionable. It started as a slight pleated collar with contrasting stitching worn about the neck, higher in the back and tapering away in the front. As time wore on, the ruff became thicker and larger. Ruffs were commonly made of linen, as stiff linen could better support the shape of a ruff than soft silk. While the ruffs grew bigger, the contrasting embroidery was replaced by delicate lace. It also became fashionable to have ruffles at one’s sleeve cuffs.

In the 1580s, ruffs became wider and flatter, requiring a supportass or underpropper, made of wire or cardboard, to hold up the ruff. Lace began to take over more and more of the ruff. A good example of the height of the wide, lacy, flat ruff is shown in the Armada portrait of Elizabeth I. Thereafter, in the 1590s, low necklines made a return to fashion and the lace ruff was altered to accommodate the change. Lace ruffs were pleated into the collar of a gown and pinned to the front edge, with the increasingly large supportass tilting the ruff up in back. One can see a supportass, ruff and neckline in the Ditchley portrait of Elizabeth I. 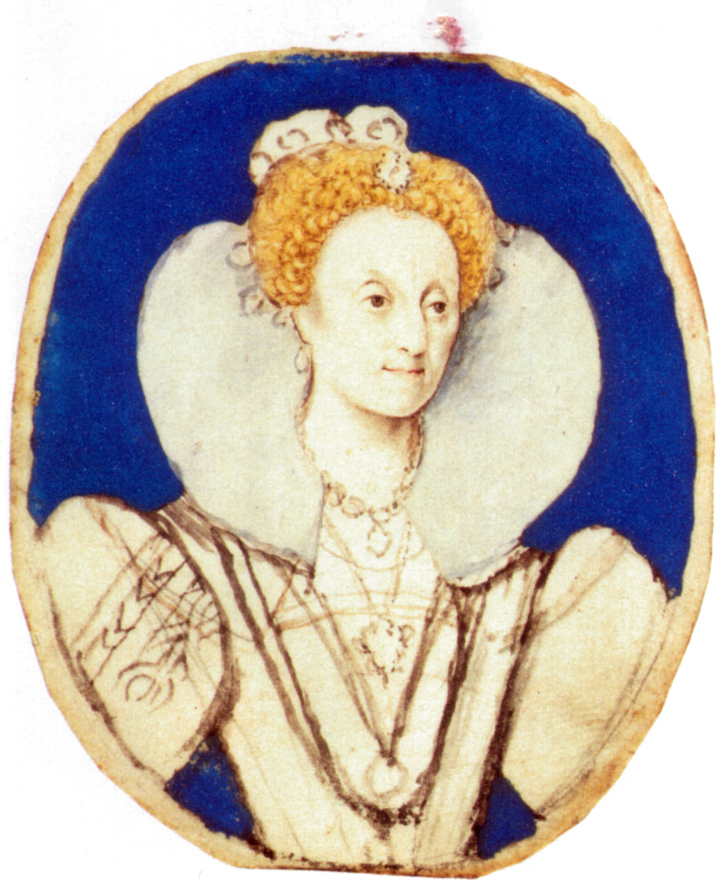 There were always people who did not closely follow the changes in fashion. Those at court embraced the different styles and were willing to adopt the attributes of foreign fashions introduced by women such as Katherine of Aragon and Anne Boleyn. Although the focus has been on fashions of the Tudor court in the 1500s, fashions varied greatly throughout the Renaissance period and between the different European countries.