In 1571, the Ottoman Turks were a proven naval force. Leading up to 1571, the Venetians had attempted to make peace with the Turks to end their expansion through the Mediterranean. Turkish ships would harry the Venetians and, through Barbary pirates, occasionally raid the coasts of France, Spain and Italy. Counter to that, the Christian Knights of St John of Jerusalem effectively behaved as pirates in their attacks and raids on Turkish ships and ports. The Turks eventually attacked and gained control over Rhodes, where the Knights had their base. In 1570, the Turks then turned their attention to Cyprus, a Grecian island in the Mediterranean controlled by the Venetians. After the Venetians refused to give up control of the island, the Turks invaded. 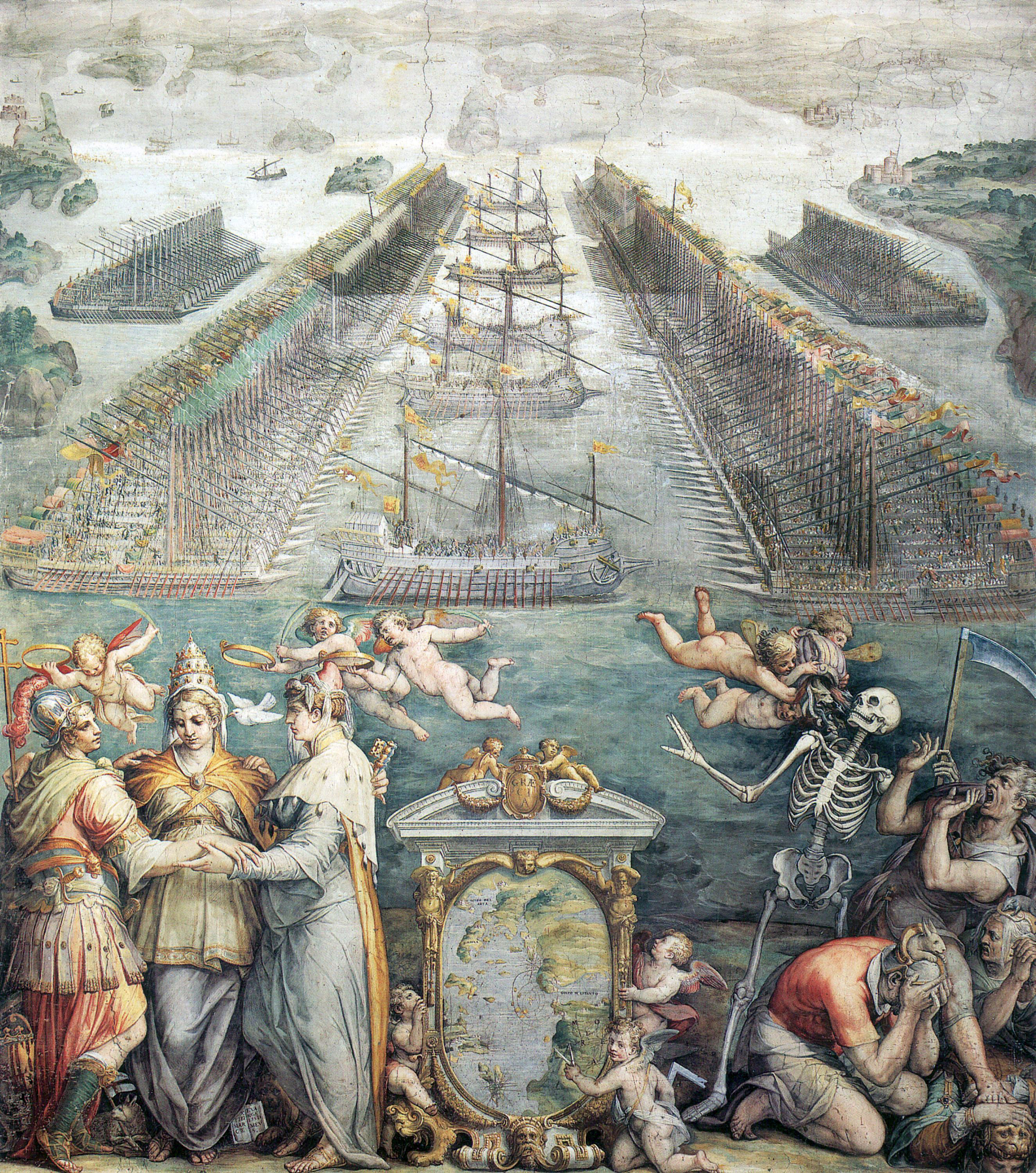 The two fleets, featuring an allegory of the powers of the Holy League in the foreground. Fresco by Giorgio Vasari, c. 1572

During the Turkish takeover of Cyprus, the Venetians appealed to Pope Pius V for help. After protracted attempts at uniting the Venetians, Spain, and other smaller Italian states, a Holy League was finally created in 1571. By late summer of 1571, the Turks had broken through to the Adriatic and the Holy League had gathered its ships in Messina, and were later joined in Corfu by the Spanish portion of the fleet.

The allied fleets belonging to the Holy League of Christendom were comprised of forces from Venice, the Pope, Malta, Genoa, and Spain. The Pope’s naval force was very small, so his contributions were mostly financial. King Philip II of Spain provide around half the physical fleet to face the Turkish threat. Philip II appointed his bastard half-brother, Don Juan of Austria, to lead the Allied fleet. There were a little less than 300 Allied ships in the fleet; the Turks had more ships but were much less disciplined or organized. On 7 October 1571, it was decided that the Holy League would attack the Turks.

On the Turkish side, Uluch Ali would come to command the left wing of the fleet, Mohammed Saulak would command the right, and Ali Pasha was in charge of the middle. Ali Pasha may have made a fatal mistake by allowing the Allied fleet to come together before facing the Turks at the port of Lepanto in the Aegean Sea. The formidable Turkish line stretched completely across the Gulf of Corinth in a crescent shape, before forming a solid line in response to the approach of the Holy League.

Seeing the threat, Don Juan decided that he would lead the Spanish fleet through the middle to face Ali Pasha, with the Venetians, under the command of Agostino Barbaro, attacking Mohammed Saulak on the right. The Genoese, led by Andrea Doria, would attack Uluch Ali on the left. The Allied fleet started toward the Turks.

The lines exchanged cannon shot, which was ineffective and not at all accurate due to the poor range of the weaponry. Uluch Ali managed to confuse the Genoese wing, led by Giovanni Andrea Doria, when Uluch Ali feinted as though he were heading for the shore and around the fleet. The Genoese ships then turned to address the Turks, whose ships suddenly turned in an effort to separate the Genoese from the main fleet. The Spanish reserve wing, led by the Marquis of Santa Cruz, saw what was happening and managed to intercept the Uluch Ali’s ships with his galleys.

In the meantime, Don Juan had taken Ali Pasha head-on. Now, the fire power of the Allied gunners was finally doing damage. Ships from both sides collided into each other, and the soldiers engaged in bloody hand-to-hand combat. Notably, Don Juan’s ship collided directly with Ali Pasha’s ship, effectively making one deck between them. The Turks were ultimately defeated after the death of Ali Pasha. At the time, the Battle of Lepanto was truly one of the bloodiest naval battles.

In the end, both sides lost around 8,000 men. The victory went to the Holy League, who captured many Turkish vessels and set free upwards of 15,000 Christians who had been held on the Turkish ships as galley slaves. Another near-casualty of the Holy League included Miguel de Cervantes, who suffered a crippling injury to his left hand and earned him the nickname of El Manco de Lepanto, the maimed one. Cervantes would go on to write Don Quixote.

The Battle of Lepanto was monumental for several reasons. First, the sheer volume of ships involved was unlike any naval battle come before, and a force that large would not be seen again for centuries. Second, Lepanto was fought with ships that were powered by oars, only. It was the last major sea battle fought using oared ships. Finally, the battle was to have little lasting effect because the Venetians in 1572 agreed to give Cyprus to the Turks. The victory itself caused much celebration throughout Europe, and, even though it was short-lived, became a popular topic and was the subject of music and art.

US Hardcover, US Paperback, US Kindle

11 thoughts on “A Brief Overview of the Battle of Lepanto”