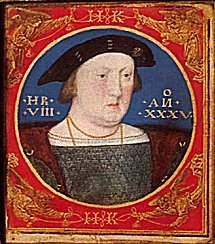 “My Mistress and Friend, my heart and I surrender ourselves into your hands, beseeching you to hold us commended to your favor, and that by absence your affection to us may not be lessened…”

Then the real pining is put to paper, though quite poetically,

“… for it were a great pity to increase our pain, of which absence produces enough and more than I could ever have thought could be felt, reminding us of a point in astronomy which is this: the longer the days are, the more distant is the sun, and nevertheless hotter; so is it with our love, for by absence we are kept a distance from one another, and yet it retains its fervor…”

This part of the letter is interesting because it illustrates the understanding of astronomy that Henry, and thus others, had in the early 16th century. These letters were written in 1527 or so, and this shows that there was some idea of how the seasons changed and why the days became longer and shorter.

Henry’s characteristic anxiety about his relationship with Anne Boleyn finally creeps into the letter,

“…it retains its fervor, at least on my side; I hope the like on yours, assuring you that on my part the pain of absence is already too great for me; and when I think of the increase of that which I am forced to suffer, it would be almost intolerable, but for the firm hope I have of your unchangeable affection for me …”

Henry then gifts Anne with another token of his affection, that is longer-lasting and a bit more meaningful than venison. It would have taken a good amount of money to commission this token, and shows the boldness of Henry’s affections for Anne,

“…and to remind you of [my affection] sometimes, and seeing that I cannot be personally present with you, I now send you the nearest thing I can to that, namely, my picture* set in a bracelet, with the whole of the device, which you already know, wishing myself in their place, if it please you. This is from the hand of your loyal servant and friend, H. R.”

*This writer speculates that the miniature in the bracelet which Henry gave to Anne could have come from the set of miniatures which Henry commissioned from Lucas Horenbout between June 1526 and June 1527. Further research is needed.

Click here for the fifth letter, or link below