It is thought that Thomas Tallis, alternatively spelled “Tallys,” could have been born on 30 January 1505, though it is not known for certain. What is known is that Tallis did not die until 1585, and contributed greatly to the development and composition of English choral music. Not much is known about Tallis’ early life. There are no records of his education or really of his whereabouts until Tallis is well into his 20s. There is also no contemporary portrait of him, with the only existing portrait having been executed sometime after his death. 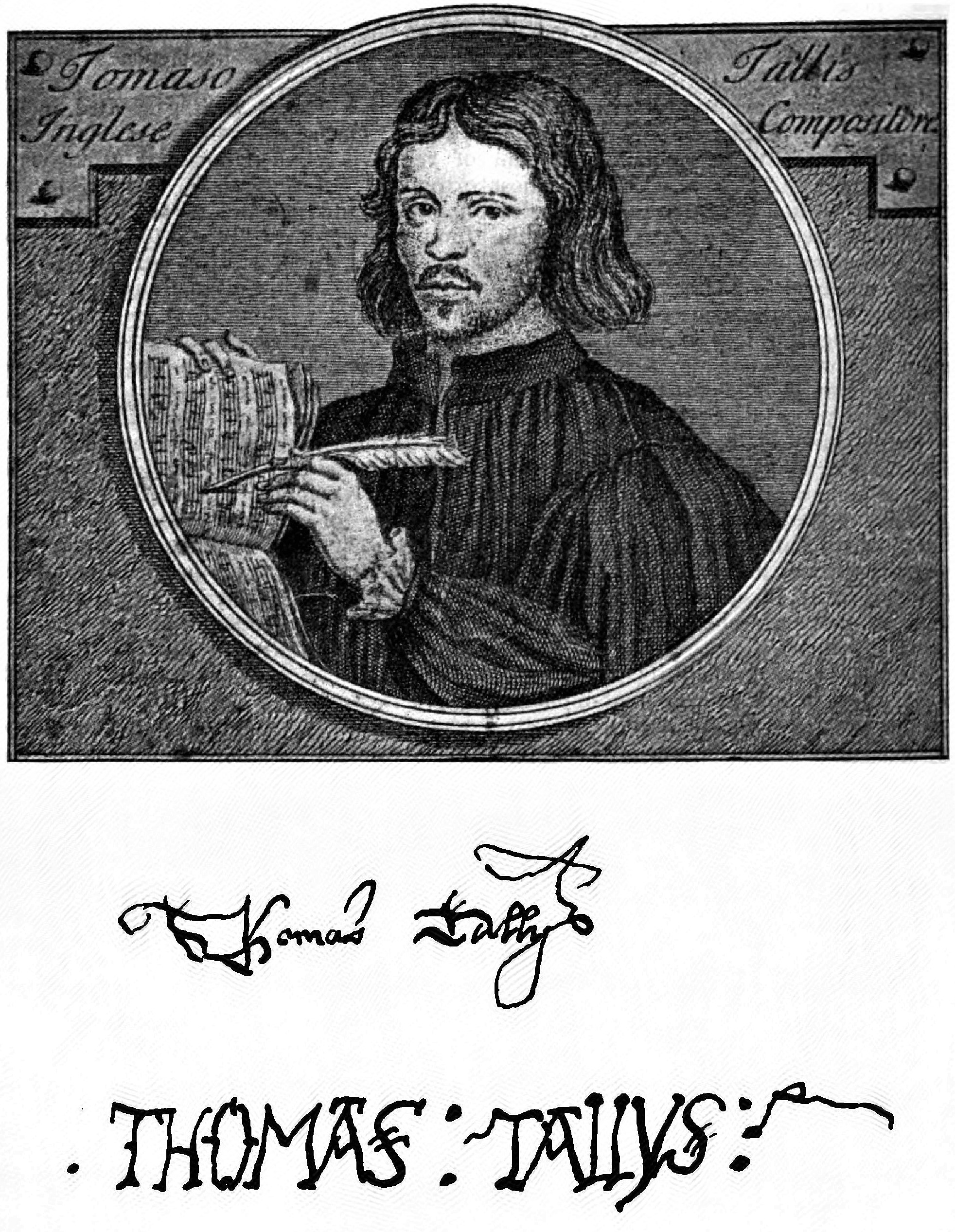 By Engraving by Niccolò Haym after a portrait by Gerard van der Gucht [Public domain], via Wikimedia Commons

His first appointment came in 1532, when Tallys served as organist of Dover Priory. Six years later, Tallis went to Waltham Abbey in Essex. Waltham Abbey was an Augustinian monastery that was dissolved in 1540. In 1543, after serving Canterbury Cathedral, Tallis joined Henry VIII’s court as a Gentleman of the Chapel Royal. Thomas Tallis went on to serve the remaining Tudor monarchs, including Edward VI, Mary I and Elizabeth I, despite the religious turmoil of the time. With each monarch came a different take on religion, requiring a different sort of liturgical music.

Tallis’ first known composition is Missa salve intemerata, which was composed in the late 1520s to early 1530s, though the real beginning of his career did not come until he entered into Henry VIII’s service. Tallis was born as a catholic and when writing liturgical music for catholic uses, he frequently set Latin text to music in the form of vocal polyphony. “Polyphony” is defined as music with two or more vocal parts sounded together. Tallis was the first English composer to introduce this Continental style of music to England.  For the new, reformed church, Tallis would set English texts to music using chords; a good example of this is Tallis’ Canon.

One of Tallis’ most famous pieces of music and highest accomplishments as a composer, Spem in alium, was the product of a challenge. Thomas Howard, 4th Duke of Norfolk, had challenged Tallis to create a work that excelled the Italian composer Striggio’s Ecce beatum lautum, which consisted of forty parts. Tallis would have been in his early seventies when he composed his master piece, first performed at Nonsuch Palace. After hearing the piece, Thomas Howard was so moved that he placed his own heavy, gold chain around Tallis’ neck. Sadly, Thomas Howard was executed not long thereafter in 1572 for his implication in a plot involving Mary, Queen of Scots.

In 1552, Tallis married his wife Joan. They never had children, though he did accept William Byrd as his pupil. Through Tallis’ tutelage, Byrd was able to secure the spot of choir master and organist at Lincoln Cathedral from 1563 until 1572. In 1575, Elizabeth I was so pleased with the work of both Thomas Tallis and William Byrd that she granted them a monopoly on that patent to print and publish polyphonic music, with said monopoly set to last twenty-one years. It was the only monopoly of its kind in the country. Tallis was able to compose his works in a variety of languages, including English, French, Latin and Italian. Because of the monopoly, Tallis held the right to publish music in any language, exclusively.

After graciously being granted the monopoly, Tallis and Byrd published Cantiones que ab argumento sacrae vocantur, a collection of thirty-four songs, seventeen by Tallis and seventeen by Byrd. Dedicated to Elizabeth I, the collection was meant to commemorate the seventeenth year of her reign. Sadly, very few copies of the collection ever sold. The Cantiones themselves were the first works published by Byrd and an ambitious achievement for the aged Tallis. Each piece of music consists of at least five voices, if not more, and features a wide range of variety in musical styles.

Upon his death in 1585, William Byrd wrote of Tallis, “Tallis is dead and music dies,” a sentiment which may have been shared by other members of court, including Elizabeth I. Byrd also wrote the Italian madrigal Ye Sacred Muses for the death of his friend and mentor; the elegy is certainly one of Byrd’s more serious works. Though, as mentioned before, we do not have an existing visual portrait of Thomas Tallis created during his lifetime, we do have a rich musical portrait of this catholic composer who successfully served the last four Tudor monarchs, showing he could adapt and had a broad range of talent. He left a mark on English music and, along with Byrd, set ground work of distinction for the heritage of English music.

** Author’s note: Thankfully, efforts have been made to preserve Tallis’ beautiful music and one can choose from a variety of recordings, including work done by the Tallis Scholars