Eleanor Ramnulfid of Aquitaine, born circa 1122, was a pretty, wealthy teenager when she married her first husband. No confirmed likenesses of Eleanor exist, and it is not known what she looked like other than that Eleanor was a beauty with gorgeous eyes. Eleanor’s father died when she was young, leaving her the vast, rich territory of Aquitaine in southern France. She was left in the care of the King, who swiftly betrothed Eleanor to the Dauphin Louis Capet. The King wasted no time in bringing Eleanor to the royal court.

On Christmas day 1137, Eleanor and her husband of five months became King and Queen of France. Their marriage did not last long, despite Louis being enamored by Eleanor. Eleanor’s inheritance of Aquitaine and Poitiers massively increased the territory under the control of the French crown. Various issues early on with the nobility and vassals put a strain on the couple’s marriage.

In 1147,  Louis was convinced by the pope to go on the Second crusade. Eleanor and her ladies went with Louis and his army to Jerusalem, an area which Eleanor’s uncle governed. Eleanor’s behavior while the couple were on crusade perturbed Louis, who eventually petitioned for their marriage to be annulled.

The couple’s first child, Marie, was born in 1145. Eleanor was roughly 23 years old, and married to Louis VII for about eight years when Marie was born. Their second child, also a girl, was named Alix and born in 1151. No sons were born of Louis’ marriage to Eleanor after fourteen years, so Louis petitioned the pope for an annulment. The annulment was granted in 1152, and Eleanor found herself once more the most eligible bachelorette in Europe. 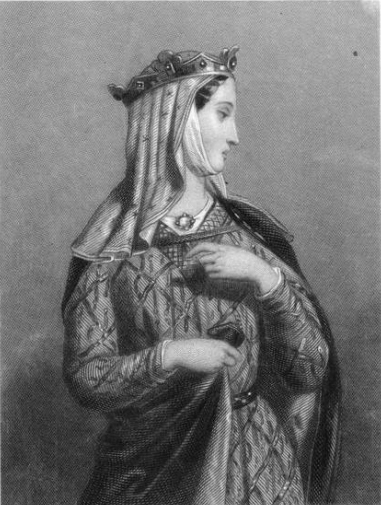 Eleanor of Aquitaine, via Wikimedia Commons.

Eleanor rapidly married Henry Plantagenet on 18 May 1152, not even two full months after her marriage to Louis VII was annulled on 21 March 1152. Two years later, Henry became Henry II of England. Eleanor was eleven years older than her new husband, but the couple had no trouble producing children. The couple had eight children over a span of thirteen years, seven of whom reached adulthood. Their first child, a boy, died young. Their other children, four boys and three girls, went on to make good matches. Three of those boys, Henry the Young King, Richard the Lion Heart, and John Lackland all became kings of England.

All was not happiness and joy for Eleanor and her husband Henry II, however.  Henry was a philanderer, which vexed Eleanor.

Eleanor’s son Henry the Young King revolted against Henry II in 1173, which some historians believe was either at Eleanor’s instigation or at least not without her blessing. Henry the Young King then fled to France, after which Eleanor sent her other sons. She may have also tried to rally support for her sons against their father amongst the nobility in southern France under Eleanor’s dominion. Eleanor was eventually captured by Henry II when she tried to leave her territory of Poitiers for Rouen. After that, Henry held her secretly for about a year before anyone learned of her whereabouts.

Henry II brought Eleanor out France and into England in July 1174, keeping her imprisoned for the rest of his life. Henry began publicly displaying his great love and favorite, Rosamund, in 1174. Henry met Rosamund at some point in 1166, and it is thought his publicly favoring Rosamund was an attempt to instigate Eleanor into requesting a divorce. Eleanor would not take the bait.

Her sons continued to attack her husband. Henry the Young King tried again to overthrow his father in 1183, this time in Limoges, an area under Eleanor’s control. Henry the Young King failed, and died that summer of dysentery. Later that year, Henry II brought Eleanor out of England and into Normandy to settle a property dispute with the French king. Eleanor remained Henry II’s prisoner until his death in 1189, even though she enjoyed the appearance of greater freedom and being present at court after 1183.

Eleanor died at the ripe old age of 82.

2 thoughts on “Breaking Up is Hard to Do: Eleanor of Aquitaine and Henry II of England”