In case you missed it on http://queenanneboleyn.com/2018/05/27/simplification-english-heraldry-comment-arms-duke-duchess-sussex-heather-r-darsie/

On Saturday, 19 May 2018, Prince Harry was declared Duke of Sussex in the early morning before his wedding. Through her marriage to the Duke of Sussex, Rachel Meghan Markle became HRH Princess Henry, the Duchess of Sussex, Countess of Barton, and Baroness Kilkeel. On 25 May 2018, the marital arms of the Duke and Duchess of Sussex were made public. Over on my FaceBook site, https://www.facebook.com/hrdarsiehistory, I posted a BBC article discussing said arms. Several comments and questions were posted, and I thought it prudent to go over some of the fundamental basics of English heraldry. Some of the minute details are left out in an attempt to keep things easier to understand. I do apologize in advance that this piece could not be more comprehensive. I will also attempt to address the questions and comments I received and choose to interpret said questions in the most innocent way possible.

Heraldry made its first appearance in England during the reign of Henry I (1068-1135). John of Worcester’s Chronicle, from the late 12th century, depicts knights holding kite-shaped shields with various lines and geometric patterns on them. By the end of the 12th century, male members of the European nobility were placing symbols, also called devices or charges, upon their shields.

Women began using heraldry between the 13th and 15th centuries. A woman was allowed to use the shield of her husband or father, but without the crest on top.  During the late medieval period, women adopted the lozenge, or diamond shape, to display their arms because the shield was considered a masculine article of warfare. Further, women were not allowed to bear the family motto, regardless of marital status. In place of the family crest, a woman might have a blue ribbon and bow, symbolizing maidenhood. Here are the arms of Catherine Middleton, the Duchess of Cambridge, prior to her marriage to Prince William, Duke of Cambridge; please note the blue ribbon: 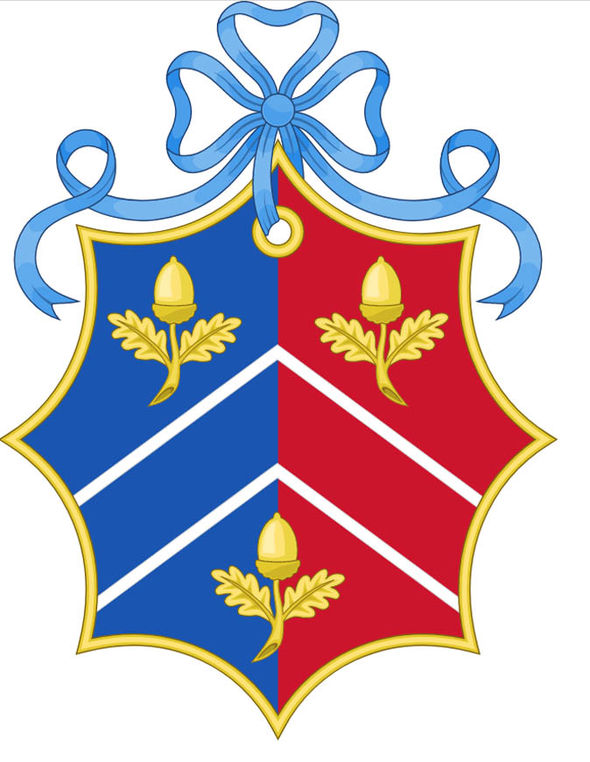 The arms of a husband and wife are combined to form one shield, or escutcheon. The term for combining is “impalement,” which means a side-by-side display of two coats on one escutcheon. The husband’s arms are always on the viewer’s left side and the wife’s are always on the right. Keeping in mind that arms were first painted onto the holder’s shield, the sides are referred to in reverse because they refer to the arm of the holder. In heraldic language, the husband’s side is called dexter, and the wife’s is sinister. The words “dexter” and “sinister” simply mean right and left.

When reading a heraldic escutcheon, it is important to keep in mind that the escutcheon is layered, like a casserole. There is the background, or field, then the divisions, which have objects over them. Color, known as tincture, plays an important part, as well. Each color has an archaic name, too. What are viewed on paper, fabric, and print as the colors white and yellow are actually interpretations of the metals silver and gold. Again, keeping in mind that coats of arms were originally painted on shields, the silver or gold of the metal shield would be seen and incorporated into the heraldic design.

Below are the coat of arms of the Duke and Duchess of Sussex, which will be discussed in brief. Next, the entire arms of achievement will be considered.

On the dexter side are the Duke of Sussex’s arms. The Duke’s arms are the Royal Arms of England, with this design being in use since the beginning of the reign of Queen Victoria in 1837. Put simply, the gold lions on a red field represent England, the red lion on a gold field represents Scotland, and the gold harp on a blue field represents Ireland. The arms are differenced, or made visually distinguishable, by the label across the top. Here, the Duke’s arms bear a label of five points Argent (silver/white) charged with an Escallop Gules, or red shells. The shells are taken from the Duke’s mother, the departed Princess Diana, née Diana Spencer, whose family arms feature three shells Argent (silver/white). The purpose of the label is to help the viewer distinguish between the different members of the English Royal Family who are entitled to bear the Royal Arms of England.    Prince Harry’s label is slightly different from that of his brother, Prince William.

The Duchess of Sussex’s arms are on the sinister side, described in heraldic language as a shield Azure (blue) a feather bendwise Argent (silver/white) quilled between two bendlets Or (gold/yellow) all between two like feathers Argent quilled Or. The symbolism behind the Duchess of Sussex’s coat of arms is, “The blue background of the shield represents the Pacific Ocean off the California coast, while the two golden rays across the shield are symbolic of the sunshine of The Duchess’s home state. The three quills represent communication and the power of words.”

Next the full achievement of arms will be considered. The achievement includes the supporters, or animals, to which members of the Royal Family are entitled. Both the Duchesses of Cambridge and Sussex, who hold their titles by courtesy as the wives of Prince William and Prince Harry respectively, are allowed to have a supporter that represents them. There is a coronet, or crown, atop the escutcheon, and a compartment, or the piece below upon which the escutcheon appears to be resting.

On the Duke’s dexter (visually left) side of the escutcheon (shield), there is a lion Or (gold/yellow) representing England. Atop its head is a ducal coronet, and about its neck the same label seen on the Duke’s arms. On the Duchess Meghan’s sinister (visually right) side, there is a songbird Argent (silver/white). While it is unknown precisely why the songbird is Argent, meaning silver but presented in print as white, the aim of arms is to create a distinct, unique, visually pleasing reference to a specific individual, much like a signature. Given that, an Azure (blue), Sable (black), Gules (red), or other color of songbird may not have been as visually appealing to the Duchess of Sussex, who was reportedly very involved in the creation of her arms. Perhaps the Duchess of Sussex wished to have a songbird Argent (silver/white) because the Duchess of Cambridge has a hind, or deer, Argent (silver/white). As a feminist, the silver songbird is visually distinct from Prince Harry’s gold lion, which could be another reason why Duchess Meghan chose the color silver. Argent and Or are somewhat opposite of each other as well, which could be yet an additional or other reason. It is simply not known why.

About the songbird’s neck, we see the coronet of the child of the heir apparent. This is a very wordy way of saying that Prince Harry is the son of Prince Charles, the heir apparent. By virtue of her marriage to Prince Harry, the Duchess Meghan is allowed to place Prince Harry’s crown about the neck of her supporter. This is customary, and the Duchess Catherine of Cambridge’s supporter bears the same crown, by virtue of her marriage to Prince William, around its neck.

Atop the coat of arms is displayed the coronet of the child of the heir apparent, the meaning of which was discussed above. The compartment shows green grass, and poppies and wintersweet Or (gold/yellow). The purpose of the flowers on the compartment are that the, “… poppies [are] California’s state flower, and wintersweet … grows at Kensington Palace.” The Duchess Meghan of Sussex is originally from California, but now lives at Kensington Palace with Prince Harry.

For visual comparison, here are the marital arms of achievement of the Duke and Duchess of Cambridge:

The names and geographic areas of the bearers of these arms are not written on the arms themselves, because the arms are unique. Someone familiar with the heraldry of the Duke and Duchess of Sussex could look at the arms and know to whom they belonged. Theoretically, if the Duchess Meghan were to ever display her arms separate from her marital arms, one would know that they were her arms. In times past, arms were displayed on buildings to show to whom the property belonged. Remember that almost everyone in a society being able to read is a very new phenomenon, so other visual cues were needed for a largely illiterate public to interpret and understand. Harkening back even farther, the arms created a visual distinction on the battlefield and at the joust, too, so men would know who the opposition was.

I do hope that this article was informative and helped to explain the reasons behind the Duke and Duchess of Sussex’s marital arms. I again apologize for over-simplifying for the sake of brevity and comprehension.

The very best wishes to the Duke and Duchess of Sussex on their journey through life together.