The Huguenots were French Protestants, formed as a part of the general Reformation that started in Germany because of Martin Luther and swept through the Continent. It hit France around 1517, where the movement quickly grew in popularity. The movement was particularly popular in French areas where the population was unhappy with the government or areas that were experiencing economic hardship.    The name “Huguenot” is of uncertain origin; some believe the Huguenots are named after Besançon Hugues, leader of the movement in Geneva, Switzerland. Another possibility finds its roots in the German word Eidgenossen, meaning confederates bound by oath, which became aignos in France and referred to patriots residing in Geneva who were against the Duke of Savoy during 1520 to 1524. In August 1523 the first martyr, Jean Vallière, was burned at the stake. 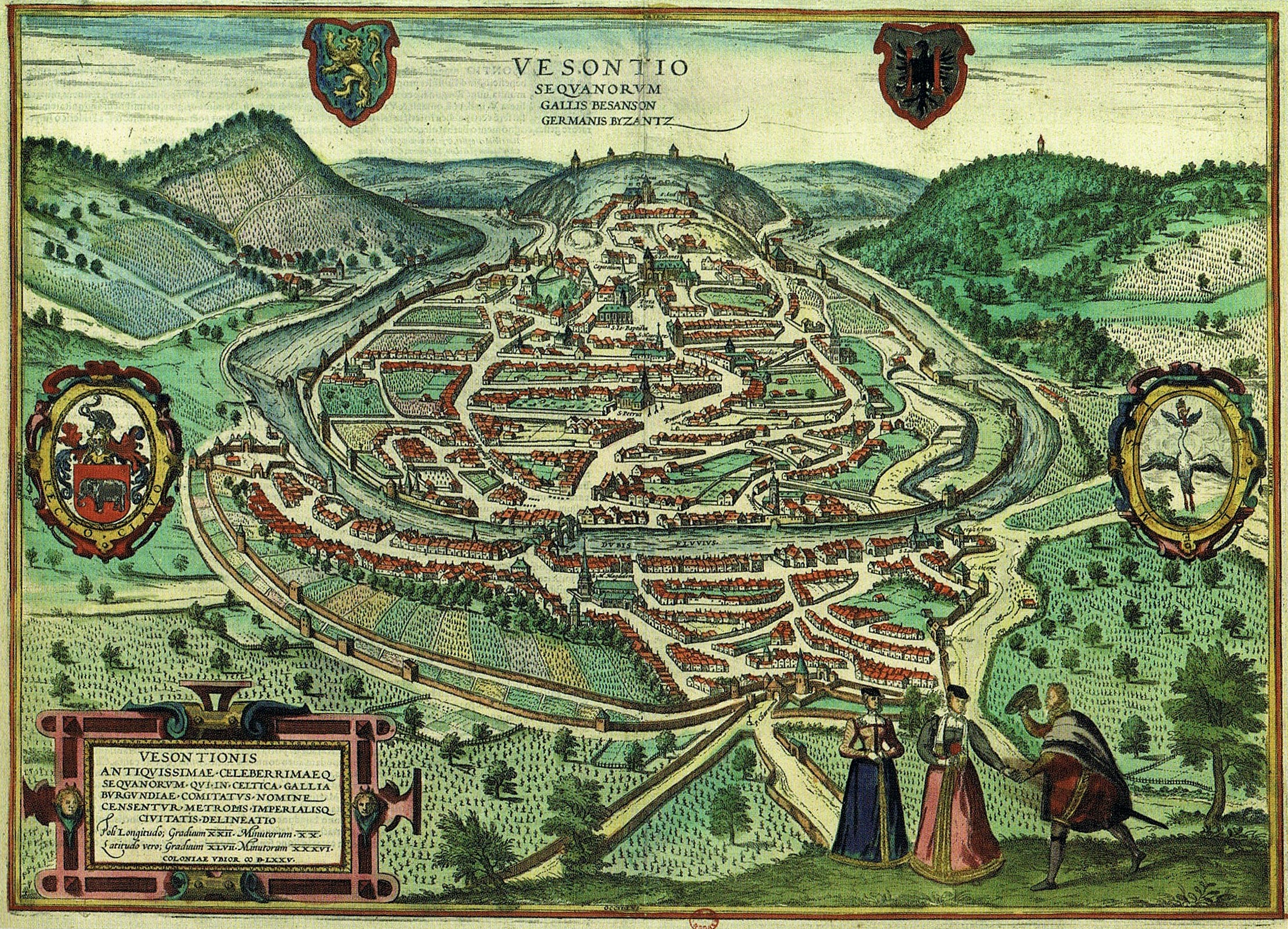 A view of Besancon in 1575 by Pierre d’Argent via Wikimedia Commons.

October 1534 saw the Affair of the Placards, where French Protestants had hung posters all around Paris denouncing the Catholic mass; one was even found on the door to Francis I’s bedchamber! Quickly following the Affair of the Placards, many French Huguenot Protestants fled France and went to places like Strasbourg in the Holy Roman Empire, a free city where Martin Boucer established a Reformed church.

Edward VI of England allowed for the first French Protestant church to be established in England. Many of the Protestants came to be followers of Jean Calvin, better known by his anglicized name of John Calvin. He fled to Basel, Switzerland in 1534. He may have written “Institutes of the Christian Religion,” which also included a preface addressed to Francis I about the Reformers in France.

John Calvin, at the invitation of Boucer, visited Strasbourg in 1538 and established a French community there. He later established a Huguenot community in Meaux in 1546. Finally, a Huguenot church was established in Paris in 1555. The first Huguenot synod was called in May 1559. The 72 deputies in attendance from all the provinces in the kingdom drew up a confession of faith that strongly followed Calvin’s ideas, and so they became Reformers and not Lutherans. At the time of this synod in 1559, there were 15 churches following the Reform movement. By 1561, only two years later, there were approximately 2,150 Reformed churches.

In March 1560, a conspiracy was launched against the young King Francis II of France, first husband of Mary, Queen of Scots. The plan was to kidnap the Catholic Francis II, but the plot was foiled and all the participating conspirators died except Louis I de Bourbon, Prince de Condé. At this point, the Reformers were led by the famous Gaspard de Coligny, who attended peace talks at Fontainebleau in August 1560. They failed. A band of Huguenots who had assembled in a barn in Vassy to worship were murdered by Catholic soldiers of the Guise family.

12 April 1562, the Huguenot leaders that were meeting in Orléans signed a manifesto, effectively declaring war for the sake of liberty of conscience and for the persecuted saints.  So began the French Wars of Religion. The French Wars of Religion, a series of eight civil wars spanning 1562 to 1598 were waged by the Catholic Valois against the Huguenots. One of the more horrendous events took place on or about St. Bartholomew’s Day in August 1572.  Many of the Huguenot leaders, including Coligny, were killed. They had assembled in Paris to celebrate the marriage of Henri of Navarre and Margaret of Valois, the French Catholic king’s sister. The violence lasted three days. This massacre crept throughout France, resulting in the often violent deaths of thousands of French Protestants.  The Wars continued on through the reign of Henri III and saw the formation of the Catholic Holy League, which was against the Huguenots. Henri III was assassinated in 1589 and Henri of Navarre became Henri IV.

After the last Valois king died and Henri de Bourbon, King of Navarre and himself a Huguenot Protestant, became king, the Wars of Religion ceased and the Huguenots were given several privileges. Henri even went so far as to accept Catholicism in 1593, effectively pulling the rug out from under the Holy League and taking away the League’s reasons for resisting Henri IV.

In April 1598, Henri IV promulgated the Edict of Nantes. Henri IV converted from Huguenot Calvinism to Roman Catholicism at the same time as the Edict of Nantes was issued. This was the first widely-known document of religious tolerance in Europe. The Huguenots were granted full civil rights and access to education, and were allowed to establish churches anywhere in France, except Paris. A special court, the Chambre de l’Édit, was established so that grievances between Catholics and Huguenots in response to the Edict could be aired and resolved. It also allowed for Huguenots garrisons to be maintained at the expense of Henri IV for eight years. After dangerous wars and a multitude of deaths, the Huguenots were allowed to finish out the 1500s in relative peace.

11 thoughts on “Who were the Huguenots? A Brief History Concerning the 1500’s”