On 6 February 1539, Anna of Cleves’ father Johann III von der Mark, Duke of the United Duchies of Jülich-Cleves-Berg died from an illness. He tuned 48 years old the November before. It was erroneously reported at Henry VIII’s court that it was Wilhelm, who was still only 22 years old, had died. Johann’s death allowed Wilhelm to pursue his clever-but-reckless political agenda, which included wedding one of his sisters to the King of England.

Johann was one of three legitimate children. His father, Johann II, was known as the “Childmaker” and had upwards of sixty-three illegitimate children. Johann III may have had his own indiscretions, but certainly not to the same extent as his father. However, one of Johann’s legitimate siblings and only sister, the Anna after whom the fourth wife of Henry VIII is named, caused both Johann and his father a headache in 1517. Johann, by then married seven years and father of four children, attempted to find a suitable husband for his sister. Their father sought input from Maximilian I, who recommended Duke Karl of Guelders. Anna chose to marry for love, and secretly wed the Count of Waldeck. She was imprisoned by Johann and their father from 1517 to 1519. She was released after renouncing the claims of her children to the Duchy of Cleves-Mark. 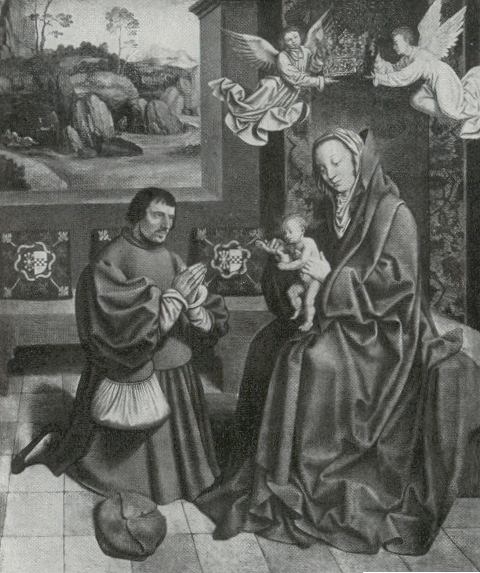 Johann III with the Virgin and Child, unknown provenance, via Wikipedia Commons.

Johann was engaged to Maria of Jülich-Berg when the two were roughly six years old. They late wed in 1510, with their marriage being dubbed the “Cleves Union”. After his father-in-law died the next year, Johann became Duke of Jülich-Berg jure uxoris, or by the right of his marriage to Maria. They had four children together; Sybylla (1512), Anna (1515), Wilhelm (1516), and Amalia (1517).

In 1519, Johann concluded a treaty with the new Holy Roman Emperor Charles V to allow Jülich-Berg and Cleves-Mark to be combined into one ducal territory once Johann was Duke of Cleves-Mark. Johann’s own father passed away in 1521. After Johann came into power in Cleves-Mark, he established the United Duchies of Jülich-Cleves-Berg.

Johann III was known as the Peaceful. He did his best throughout his reign to stay away from military entanglements unless absolutely necessary. He smoothed out the administrative and bureaucratic issues which came to the fore during the reign of his father, and overhauled the tax system. He created new governmental organizations to administer his plans. Johann reformed the legal system in his territory as well, to positive result.

There are conflicting reports as to whether Johann was agile in mind, or whether it was his wife Maria who had a keen sense of politics. Either way, the reforms introduced during their marriage made the United Duchies a successful, calm place to live despite the sometimes violent issues the German Reformation brought.

Johann maintained a close relationship with Desiderius Erasmus, even offering the humanist a stipend and place at the Cleves court. Johann, like his wife Maria of Jülich-Berg and their four children, were Catholics. Later, the eldest, Sybylla, and youngest, Amalia, would become Lutherans in their adulthood. Johann adopted a stance of religious tolerance in the United Duchies, but did not outright allow for Lutheran texts or teachings to be circulated within the United Duchies. He remained a Catholic throughout his life.

Johann was against Wilhelm’s desire to grab power and magnify the might of the United Duchies. Johann’s, and to a greater extent Maria’s, family had always been friendly with the Holy Roman Emperors Maximilian I and Charles V. However, in 1538, the young Wilhelm was given an opportunity to gain control of the important Duchy of Guelders, a land also claimed by Charles V. Duke Karl of Guelders, the very same Duke Karl who was supposed to marry Johann’s sister, knew he would die without heirs and chose to pass the Duchy of Guelders to Wilhelm. Johann was against the idea, but Wilhelm went through with accepting the title anyway in 1538 after Duke Karl’s death. Perhaps this gave Johann a glimpse into his only son’s nature as a ruler.

Johann, possibly recognizing that he was ill, had portraits taken of Anna, Wilhelm, and Amalia in 1538, shortly before his 1539 death. The portraits of Anna and Amalia were requested by Henry VIII, who later sent his own court painter, Hans Holbein, to make a portrait of Anna. The portraits of Wilhelm and Anna still exist; the whereabouts of Amalia’s portrait is unknown.

Swiftly after the burial of Johann in Cleves, Wilhelm jumped at the chance to wed one of his sisters to Henry VIII. Exactly eleven months after Johann’s death, his middle daughter Anna married Henry on 6 January 1540. Within six months of the marriage, Wilhelm’s political machinations would begin to unravel. 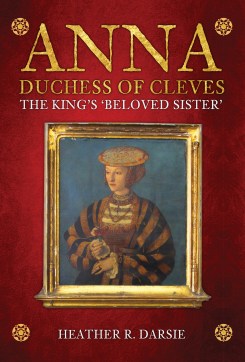