Isabella, mother of Katharine of Aragon and one of the Catholic Monarchs, did not easily come to the throne of Castile. Isabella’s older half-brother ruled as Henry IV, known as the Impotent, of Castile. Whether Henry IV was truly impotent became an issue for his daughter and Isabella’s niece, Joanna of Castile. Joanna was Henry IV’s heir until a rebellious faction at court wanted to put Isabella on the Throne of Castile. 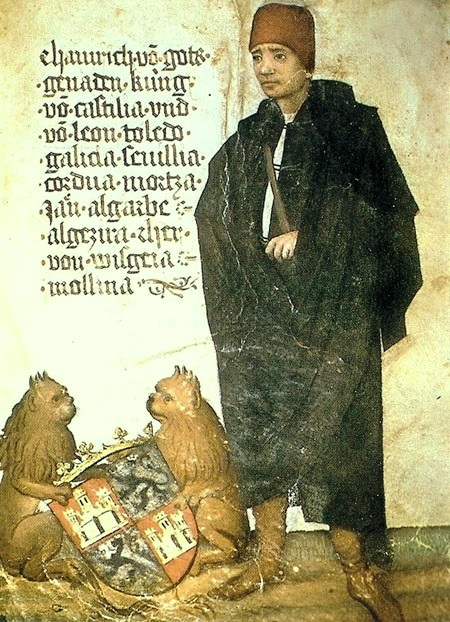 Henry IV, born 5 January 1425, was married twice. First, in 1440 at the age of 15, he married Blanche II of Navarre. The couple were married for about thirteen years before the marriage was annulled due to Henry being impotent, so presumably the marriage with Blanche was never consummated. Henry’s impotence was blamed on a curse. Curiously, that curse, according to Henry, only impacted his ability to consummate his marriage with Blanche. Other women were not an issue. The curse and its explanation were accepted by Pope Nicolas V, who issued a papal bull in December 1453 which allowed Henry to marry Joan of Portugal. Interestingly, Blanche and Henry may have remained on good terms after the annulment, because Blanche declared Henry her protector in 1463 and gave him the opportunity to claim the Throne of Navarre.

Henry married Joan of Portugal, his cousin twice over, in May 1455. He was thirty, and Joan was sixteen. On 28 February 1462, Joan gave birth to a daughter, Joanna. She was invested as a Princess of Asturias (heir apparent). Henry and Joan were married for almost seven years before Joanna was born. That coupled with Henry’s alleged impotence and Joan’s philandering led to Joanna being alleged a bastard who Joan bore as a result o her liaison with Beltran de la Cueva. De la Cueva was the 1st Duke of Albuquerque. Joanna was called “la Beltraneja”, an allusion to her rumored illegitimate status. Henry and Joan did not have any other children together besides Joanna la Beltraneja.

When Joanna was roughly two years old in 1464, a schism at the Castilian court agitated for Henry to give up Joanna’s right to the throne in favor of either his half-brother Alfonso, who was 10 or 11 years old, and then to Henry’s half-sister Isabella, who was about 13 years old. Henry caved to the demands, and Alfonso was declared Prince of Asturias. A year or so later, Henry went back on the agreement, and reinstated Joanna as Princess of Asturias. Enraged, the faction behind Alfonso held a mock-deposition of Henry and crowned Alfonso as King of Castile. This led to a civil war in 1467, but Henry remained on the Throne of Castile. Alfonso died abruptly in 1468.

In an effort to quell the rebels, Henry agreed to leave his throne to his half-sister Isabella and once more deny his daughter Joanna. Upon Henry’s death in 1474, 12-year-old Joanna la Beltraneja and 23-year-old Isabella of Castile fought for the right to claim the throne. The possibility that Joanna was not in fact Henry’s child greatly hurt her claim. Joanna’s first husband, whom she married in 1470, passed away in 1472. By 1474, Joanna was engaged to her uncle Alfonso V of Portugal. Isabella, on the other hand, was an adult whose legitimacy was not in question. Isabella was married to her second cousin, Ferdinand of Aragon, since 1469, and mother to a living daughter by 1474.

Isabella I of Castile, via Wikimedia Commons.

Alfonso moved his army forward, but was disappointed by the lack of support from the Castilian nobility. Alfonso enjoyed some victory over Isabella’s forces, led by her husband Ferdinand. Alfonso did not typically engage in direct military offenses, which became a disadvantage at the Battle of Toro on 1 March 1476.

The Battle of Toro did not have a true winner, but Ferdinand and Isabella were able to later spin the battle’s outcome in their favor. Those fighting for Joanna were called Juanistas (her name in Spanish was Juana) and for Isabella, Isabelistas. The Juanistas were victorious over one segment of the battle thanks to Prince John, later John II of Portugal. The Isabelistas, led by Ferdinand of Aragon, won the other segment. However, several Juanistas  defected and became Isabelistas.  The Juanistas managed to maintain control of the seas throughout, and Isabelistas kept the various parts of the Iberian peninsula under control.

Alfonso chose to sign a peace treaty with the Catholic Monarchs and renounced his claim to the Castilian crown. Joanna, by this time roughly seventeen years old, had to decide between marrying Isabella’s one-year-old son or entering a convent. Joanna chose to enter a convent, which received Isabella’s approval. She later was allowed to live out the rest of her life in a castle.

Joanna never had children, so her closest heir was Isabella and Isabella’s descendants. Through Isabella, Joanna la Beltraneja’s next heir was Juana the Mad. After Juana the Mad was removed from the throne, her son the future Holy Roman Emperor Charles V became king.

Joanna signed her name as “Juana the Queen” until her death in Lisbon on 12 April 1530.

One thought on “Isabella and Joanna of Castile: The Fight for the Throne”