Arthur Plantagenet was born in the late 1460’s in English-held Calais. He was the illegitimate son of King Edward IV o England. His mother’s identity is unknown. Up until Edward IV’s death in 1483, Arthur was raised at court. It is not known how his teenage years were spent after Edward’s death and during the reigns of Richard III or Henry VII. When he was in his early 20s, he joined his half-sister Elizabeth of York’s household. She died a couple years later from a complicated childbirth. After that, he was moved to his brother-in-law Henry VII’s household, and remained a fixture at court. 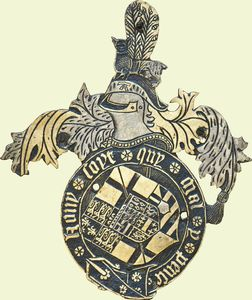 Arthur received various honors from his nephew Henry VIII after Henry became king in 1509. Including be made Esquire of the King’s Bodyguard c. 1509, he eventually became Vice-Admiral of England. In 1511, Arthur married Elizabeth Grey. When Elizabeth’s niece, the son of her brother John, 2nd Viscount Lisle, died in 1519, Elizabeth was the only family member available to inherit and became 6th Baroness Lisle. Arthur and his wife were part of Henry VIII’s train during the Field of Cloth of Gold in 1520. In 1523, Henry VIII awarded his uncle Arthur the title and rights of 1st Viscount Lisle by virtue of Arthur’s marriage to Elizabeth.  He lost the title when Elizabeth died a couple years later.

Arthur next married Honor Grenville in 1529. It was a second marriage for them both. They did not have children together, but Arthur was involved in raising his stepchildren. Arthur received several more important duties from Henry VIII. By 1533, Arthur was Governor then Constable of Calais, and Lord Warden of the Cinque Ports. As Constable of Calais, Arthur had a few curious tasks, such as finding quail eggs for Jane Seymour during her pregnancy in 1537. Honor Grenville corresponded with Anne Boleyn, and appears to have been supportive of her.

From Arthur and Honor the world has the Lisle Letters. Because they were stationed in Calais, Arthur and Honor had to conduct most of their court and day-to-day business via letters to England. Their letters were seized in 1540 when Arthur, then roughly 65 to 70 years old, was arrested with a group of other Calais officials for treason. Arthur was kept in the Tower of London for two years. Henry decided to release Arthur in 1542. Upon hearing the news of his imminent release, Arthur had a heart attack and died on 3 March 1542.

Arthur was arrested 19 May 1540, and Honor arrested the day after. She was placed under house arrest for two years in Calais. After Honor’s release, she went through a period of great joy in learning that both she and her husband Arthur were free, then great sorrow upon learning of his death. After returning to England, she lived away from court for the rest of her life. Honor died in 1566, aged roughly 73 years.

The downfall of Arthur and his wife Honor came about because of rumors that Honor, secretly a Catholic, was trying to secure a marriage for one of her daughters to a Frenchman. The French were enemies of England; if a noble person married a French person without proper royal approval, that amounted to treason. The letters between Arthur and Elizabeth were seized in hopes of finding evidence of their suspected treason. It was never found. Arthur outlived his legitimate Plantagenet cousin Margaret de la Pole by about one year.