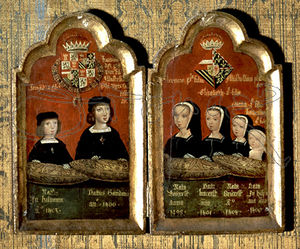 Catherine, the youngest of the Habsburg children, was born 14 January 1507. She was named after her aunt Katharine of Aragon, who was living in England by this time. Catherine’s father predeceased her by less than four months. She and her elder brother Ferdinand stayed with their mother at the Spanish court. Unlike her brother Charles, and sisters Eleonore, Isabella, and Maria, Catherine and Ferdinand’s first language was Spanish and not French or German.

In February 1509 when Catherine was just two years old, she and her mother were ordered to stay in the palace at Tordesillas. Catherine’s grandfather, Ferdinand II or Aragon, effectively usurped the government from Queen Juana by declaring her mentally unstable.  Ferdinand II died in January 1516, so Catherine’s eldest brother was declared King of Spain.Charles and Eleonore returned to Spain in autumn 1517 for Charles to be crowned as Charles I of Spain. The following summer, Ferdinand was moved to the court of Flanders. Catherine stayed on with her mother until 1525.

Catherine married King John III of Portugal. They were related through Catherine’s maternal aunt and John’s mother Maria of Aragon. As a side note, Catherine’s brother Charles married John’s sister Isabella of Portugal, so their were two intermarriages between these cousin groups. Catherine and John married in February 1525, and Isabella and Charles married the following year.

As queen, Catherine was a patron of female scholars. She invited several to join her household. Catherine was known to maintain an extensive library, too. Throughout her life as Queen of Portugal, Catherine imported porcelain from China and displayed it around the royal residences.

Catherine gave birth to at least nine children. Only two survived until adulthood, a daughter and a son. Catherine’s daughter Mari Manuela, born in 1527, was the first wife of Philip II of Spain. Maria and Philip were double-first cousins, which effectively meant they were half-siblings, genetically speaking. Philip was the son of her paternal aunt Isabella and maternal uncle Charles V. Maria died days after the birth of her only child, the insane Don Carlos. Don Carlos was imprisoned by Philip in 1568, when Don Carlos was twenty, and he died later that year in confinement. Don Carlos did not have any children.

Catherine’s other child to survive to adulthood, John Manuel, was born in 1537. He married his double-first cousin, Joan of Spain. John was related to Joan the same way that Maria was related to Philip II. His only child, a baby boy, was born days after John’s death in January 1554. The baby was named Sebastian, and lived until he was twenty-four years old. After a dispute with her daughter-in-law Joan, Catherine managed to gain the regency of Portugal during Sebastian’s minority.

Sebastian died in August 1578, six months after his grandmother Queen Catherine of Portugal, and without heirs. He died during the Battle of the Three Kings. Catherine’s line died out within six months of her own passing.

Catherine died 12 February 1578. She was seventy-one years old, and outlived all of her siblings by at least a decade, if not two.