Please enjoy this article I wrote, which originally appeared at: http://queenanneboleyn.com/2017/10/18/margaret-tudor-scottish-queen-english-princess-heather-r-darsie/

Margaret Tudor shuffled off her mortal coil on 18 October 1541, just shy of 52. Though her official cause of death is unknown, it is most likely that Margaret from complications due to a stroke.  A letter dated on or about 31 October 1541 was written by Henry Ray to Henry VIII of England’s council. Henry Ray,

“[r]eports that, as commanded, he has been in Scotland to inquire of the death of the Queen, and whether [Margaret Tudor] died intestate. She took a palsy upon the Friday [14 October 1541] before night, at Meffen, and died on the Tuesday [18 October 1541] following before night, but, as she doubted no danger of death, omitted to make her will until past remembrance for that purpose. She sent to Falkland for the King, her son, who came not till after she was departed. Seeing death approach, she desired the Friars, her confessors, on their knees, to beseech the King to be gracious to the earl of Angus, and asked God mercy that she had so offended the Earl. She also asked that lady Margaret Douglas, her daughter, might have her goods. The same day, after her decease, the King came to Mephen and commanded Oliver Sinkler and John Tenant, of his Privy Chamber, to lock up her goods to his use. She left in money but 2,500 mks. Scots. Signed: By me, Barweck Porsovant (Pursuivant). Hol. Headed as to my lords of the Council.” 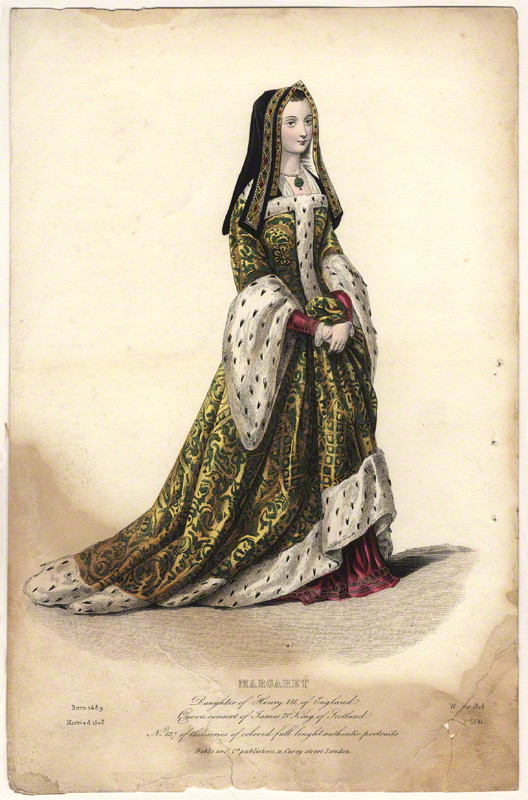 Henry VIII had now outlived all of his siblings, including his older brother Arthur (died 1502), younger sister Mary (died 1536) and older sister Margaret. Days before his sister’s death, Henry’s nephew by Margaret, James V of Scotland, failed to meet with Henry.

Views of Margaret Tudor and her life vary greatly. On the one hand, she is viewed as a woman who did what was most safe for herself and hopefully, her children. On the other, Margaret has been regarded by some historians as having, “…the faults of the Tudors without their brains, and was in any case of doubtful loyalty.” The most scrutiny for Margaret swirls around her decision to marry after her husband’s death. James IV died at the Battle of Flodden on 9 September 1513, leaving the pregnant Margaret and baby James V behind.

After her husband’s death, Margaret briefly assumed the regency for her baby son. That quickly came to an end in 1514, when Margaret remarried; she chose the Earl of Angus as her husband. By James IV’s will, Margaret could be regent so long as she was a widow. Margaret, sister to the enemy English King Henry VIII, married the pro-English Archibald Douglas in secret on 6 August 1514. Thereafter, put very simply, John Stewart, 2d Duke of Albany was installed as regent by July 1515. Albany had grown up in France and renewed the Auld Alliance between Scotland and France.

Margaret left for England for about a year after losing custody of her sons James V and the infant Alexander. She gave birth to her and the Earl of Angus’ only child in October 1515, and named their daughter Margaret Douglas. Margaret’s marriage to the Earl of Angus eventually failed and a divorce was granted by the Pope in 1527. Margaret married Henry Stewart in 1528.

Margaret stayed politically active in Scotland to the best of her ability throughout the rest of her life. Margaret formed a bond with the Duke of Albany and attempted to reclaim her children in around 1524. Margaret was a woman caught between two worlds after her first husband’s death in that she was very much an English woman, and spent much of her later life in England, but her heart was in Scotland with her son. She was drawn into Scottish matters for the rest of her life. As a woman of her time, she married very soon after each failed (for various reasons) marriage, which offered her a degree of protection. To say that she had a Tudor’s faults and no brains, as has been said by a modern historian, flies in the face of female reality in the 16th century.

Margaret Tudor was buried in the Charterhouse of the Carthusian Priory in Perth. The church was utterly destroyed during the Scottish Reformation and with it, the tomb of Margaret and several other members of the Scottish Royal Family. Margaret, surely a woman who made mistakes, arguably did her best to balance her life as a Scottish queen and English princess and should be criticized under the circumstances of her time and not from a modern perspective.