Mary, Queen of Scots returned to Scotland on 19 August 1561. She was not quite nineteen years old, and already a widow. Speculation swirled around whom the young Scottish queen with a claim to the English throne would wed. 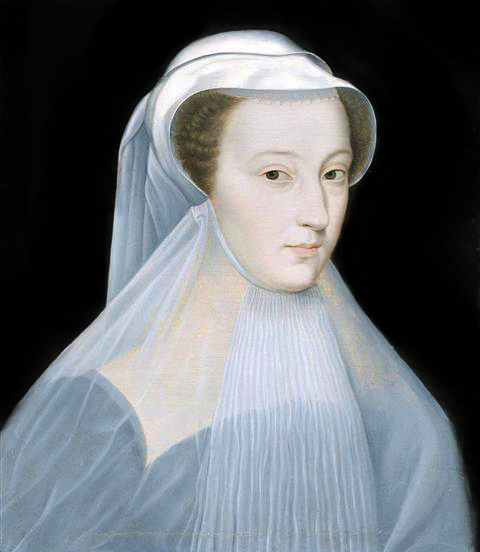 Mary, Queen of Scots in White Mourning after the Queens of France, after Francois Clouet, c. 1560. Via Wikimedia Commons.

Mary’s next choice of husband was her English half-cousin, Henry Stuart, Lord Darnley. Both Mary and Henry were descended from Margaret Tudor, Henry VIII of England’s sister. It is through Margaret Tudor that Mary could assert her right to the English throne. Mary met Henry in early 1561, when she was still in mourning for her first husband. Henry’s parents sent him to France to give Mary their condolences, and possibly to plant the idea of Henry as a husband in the grief-stricken Mary’s head.

Henry arrived in Edinburgh around 12 February 1565. He presented himself to Mary on 17 February, and Mary instantly fell for his looks. It was remarked that, “Her Majesty took well with (Henry Stuart, Lord Darnley), and said that he was the lustiest and best-proportioned long man that she had seen.” The remark was made by a man who was around Mary most of her life: James Melville of Halhill, who joined her household in France in 1549 and received an appointment from Mary upon her return to Scotland.

Within three months of their February meeting,in mid-May 1565, Darnley was elevated to Earl of Ross, amongst other titles. Henry was further elevated on 22 July 1565 to Duke of Albany in anticipation of his marriage to Mary. Elizabeth I of England was furious at what was happening between her two cousins, and demanded that Henry, as an English subject, return to her realm. Needless to say he did not, and the marriage proceeded. Mary and Henry did not apply for a papal dispensation for their marriage, although they were within the forbidden degrees of affinity. Their marriage took place on 29 July 1565 at Holyrood.

The marriage soured fairly quickly. Henry wanted to be more than a consort, and demanded the Crown Matrimonial of Mary. His demand does make some sense if only, by blood, he would be next in line to the Throne of England behind Mary should Mary gain the throne. However, his demands seemed more due to his foul temperament. The couple did manage to conceive by late 1565.

Things took a dramatic turn for the worse in early 1566. This is a dalliance from the main purpose of this article, but an important dalliance nonetheless. On 9 March 1566, the known-to-be-pregnant Mary was dining in her private chamber with her secretary, David Rizzo, and a handful of her ladies. Henry, who was insanely jealous, burst in on the diners. One of Henry’s henchmen held a pistol to the pregnant Mary whilst Henry stabbed Rizzo to death. This is an obvious atrocity. What makes it even worse is the small space within which it happened.

Mary’s only child James was born in June 1566. Henry was later killed under suspicious  circumstances in February 1567, and the beleaguered Mary took Lord Bothwell as her next husband. Her reasoning for this choice is up for debate. At the battle of Carberry Hill in June 1567, Mary surrendered to her rebellious lords. Bothwell abandoned her on the field. Mary was 24, with a one-year-old son, and pregnant with Bothwell’s twins. By 23 July, the Queen of Scots miscarried the twins. On 24 July, the imprisoned, abandoned, physically (not to mention emotionally) weakened Mary was forced to abdicate in favor of her baby son. A little over a month later, on 29 July 1567, the infant James was crowned King of Scots in Stirling at the Holyrood Kirk.

What a difference two years can make.

4 thoughts on “Mary, Queen of Scots: What a Difference Two Years Can Make”