As previously seen on Tudors Dynasty

Born on 14 May 1553, Marguerite, affectionately known by her nickname of Margot, was the seventh child and third daughter of Henri II of France and Catherine de’ Medici. Margot spent her early life being raised alongside her sisters Claude and Elisabeth. Margot was particularly good with languages, excelling at the international language of Latin, along with the Italian of her mother and her country’s French. Margot learned Spanish and Italian, too. Margot’s education was rounded out by studying history, Holy Scripture, and grammar. Margot’s formative years increased her faith and belief in the Catholic religion. 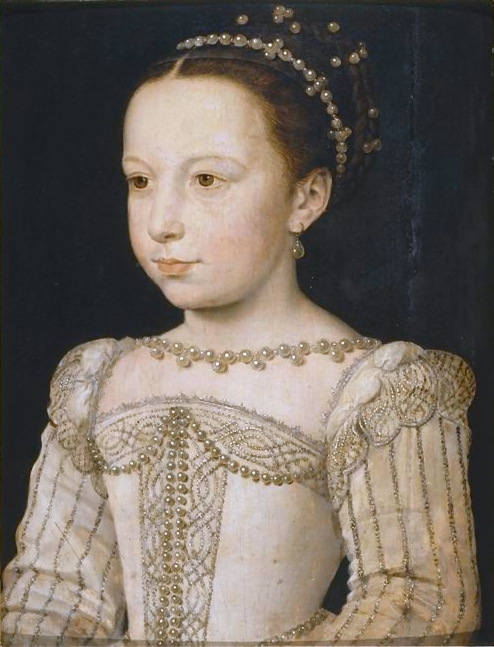 Particularly notable and of great value to historians are Margot’s memoirs. As the first woman known to have written her own memoirs, Margot’s work provides an invaluable look at French court life and the French Wars of Religion during the late 16th century. Just why Margot wrote her memoirs will be explored later.

When Margot was six, her eldest brother became Francis II of France. Francis II and his bride Mary, Queen of Scots, were king and queen of France and Scotland from only September 1559 until December 1560. Francis II died from an unidentified illness, and Margot’s ten-year-old brother Charles IX became king. At the same time, Catherine de’ Medici took control of the throne by declaring herself regent. Margot would grow into adulthood under the reign of her infantile, powerless brother Charles. The religious struggle brewing between the Catholics and Protestants, known as Huguenots, would come to a head during Charles’ reign and continue to affect Margot for most of the rest of her life.

Catherine de’ Medici went to great pains to show the power and splendor of her son Charles. The royal family disembarked on the Grand Tour of France in January 1564, when Margot was not yet eleven. The first bought of the French Wars of Religion took place in Spring 1562, when various Protestant factions effectively seized control of French cities, including Orléans and Lyon. Erupting off and on for the next year, the First War saw legions of Protestant Huguenots die, the death of Antoine of Navarre, and the assassination of Francis, Duke of Guise. Catherine de’ Medici negotiated the Edict of Amboise on 19 March 1563, less than two months before Margot’s tenth birthday. The Grand Tour of France was a way for Margot’s brother Charles IX and Catherine de’ Medici to show the wealth and grandeur of the French court to the outlying areas. It was also an attempt at soothing tensions over the religious divide.

The Grand Tour lasted over two years. Margot, her brothers, mother, and the young Henri of Navarre. Henri of Navarre was a distant cousin of the Valois-Medici family, and the crown would fall to him if Margot’s brothers died without male issue. Henri’s father died in 1562 during the first War of Religion. Henry’s mother, Jeanne d’Albret, was a Huguenot; Henri was effectively a hostage of Catherine de’ Medici’s to ensure Jeanne’s good behavior. Either way, it can reasonably be assumed that Margot had an opportunity to learn about Henri during the lengthy Grand Tour.

A young Margot as Queen of Navarre, courtesy of Wikimedia Commons

Margot’s sisters, Elisabeth and Claude, married at the respective ages of fourteen and eleven. Margot had to wait until she was nineteen years old. Even worse, Margot, a devout Catholic, married Henri of Navarre, the leader of the Huguenots. Henri’s mother Jeanne passed away in June 1572, and Catherine de’ Medici wasted no time in wedding Margot to Henri that August. A mere six days after Margot’s marriage, St. Bartholomew’s Day massacre occurred.

The Massacre was preceded by a botched assassination attempt of Admiral Gaspard de Coligny, a friend of Charles IX and powerful Huguenot military leader. Coligny tried to convince Charles to attack the Spanish-held Netherlands, which would have somewhat wrested Charles from the control of his and Margot’s mother Catherine de’ Medici. Though it is not known who arranged for Coligny’s assassination, one theory is that Catherine herself arranged it. Ultimately, Coligny survived the assassination-by-firearm with a shattered left elbow and missing finger from his right hand. The St. Bartholomew’s Day Massacre was a preemptive strike by the Catholics to prevent any sort of retaliation by the Huguenots. The carnage spilled into Margot’s room that night, but she was able to protect her new Huguenot husband and a couple of his servants. Margot even chose to stay married to her new Huguenot husband despite their religious differences, as she and Henri had already consummated their marriage.

The next twenty-five years of Margot’s life were rife with conflict.