Erasmus: his name is synonymous with humanism, education, and intelligence. Across Northern Europe several Erasmus programs exist at universities, so students may pursue their studies at multiple universities and in multiple languages. During his lifetime, Erasmus corresponded with such notable people as Sir Thomas Moore and John Colet. Erasmus assisted Hans Holbein in his quest to move to England and influenced Anna of Cleves’ father when he was writing religious tolerance laws. 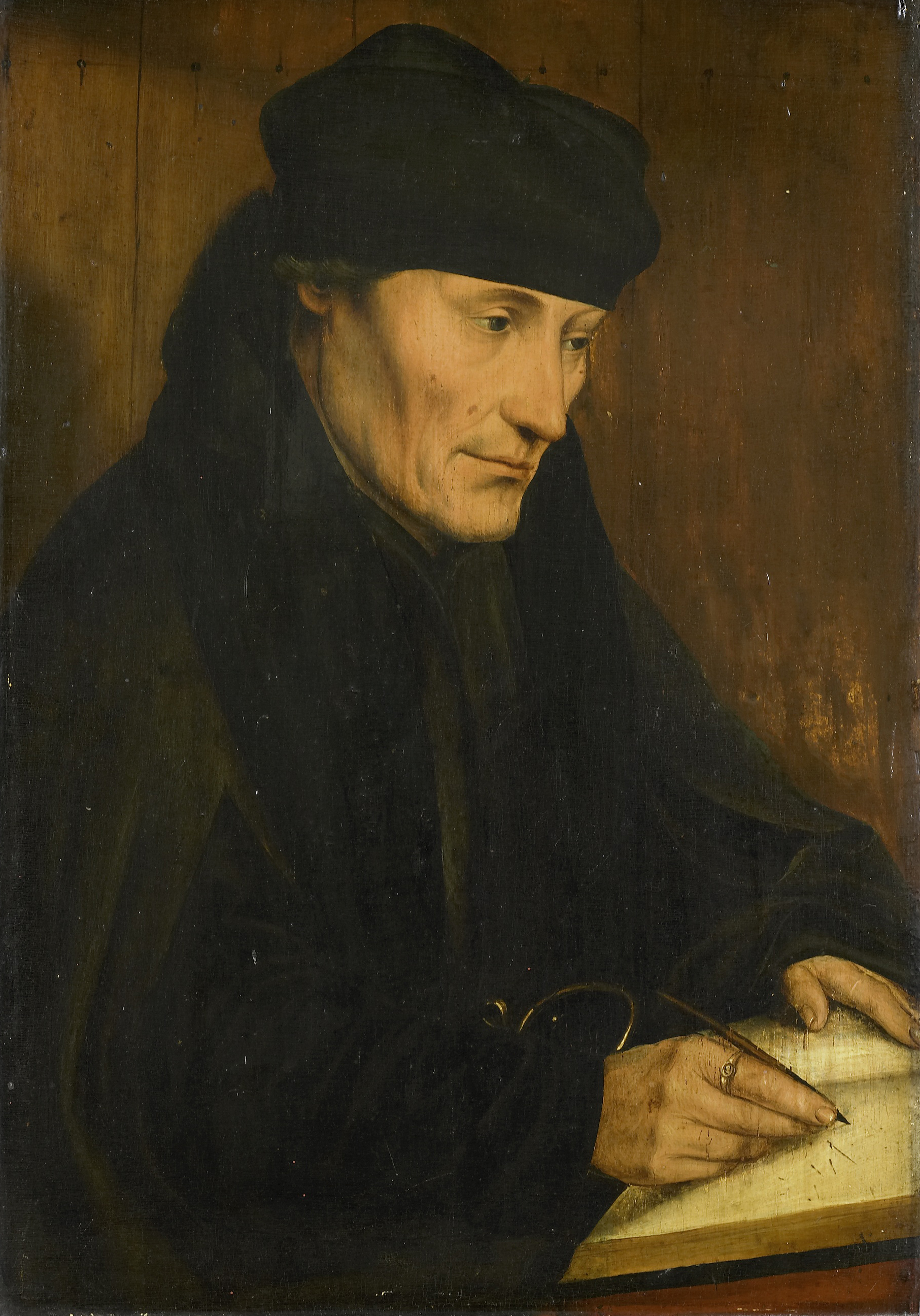 Desiderius Erasmus circa 1535. Courtesy of the Rijksmuseum via Wikimedia Commons

Desiderius Erasmus was born on 27 or 28 October 1466 or 1467* in Rotterdam, Netherlands; his exact date of birth is not known. The second son and an illegitimate child of his father, a priest, and mother, a physician’s daughter, Erasmus was sent to school at the age of five. In about 1484, when Erasmus was approximately eighteen years of age, his parents both died of plague. Erasmus’ three guardians sent Erasmus and his brother to a new, more conservative school run by the Brethren of the Common Life. There, Erasmus studied Latin and Christian theology.

In 1487 Erasmus entered a monastery at Steyn, took monastic vows a year later, and was ordained priest in 1492. Thereafter, Erasmus was employed by the bishop of Cambrai as the bishop’s secretary. Recognizing Erasmus’ intellectual abilities, the bishop gave Erasmus a salary in 1495 so Erasmus could study in Paris. While in Paris, Erasmus participated in scholarly circles and wrote poetry, gaining students and patrons.

In 1499, Erasmus made a fateful trip to England with one of his students. Because of this trip and new-found friendships with Sir Thomas Moore, who later became one of Henry VIII’s right-hand men and chief advisor, and John Colet, Erasmus began studying Greek. The Greek language proved to be key to Erasmus’ theological studies and lead to him finishing and publishing his first work, “Enchiridion militis Christiani (Handbook of the Militant Christian),” in 1503.

After England, Erasmus went to Italy in 1506, where he anonymously published “Julius exclusus,” a scathing review of Pope Julius II, wherein St. Peter bars Julius II from entering heaven because of his bellicose actions as pope and seeming greed; a war was waged by the Pope in Bologna at this time. Erasmus also continued his study of the Greek language and established a relationship with the Italian publishing house of Aldus Manutius, which would go on to provide Erasmus with financial independence. Erasmus returned to England in 1509 at the age of approximately 43. Still disappointed by the state of the Christian church and his time in Italy, Erasmus wrote “Encomium moriae (The Praise of Folly).” From 1511 to 1514, Erasmus served as a professor at Cambridge. Erasmus briefly traveled to Basel, Switzerland, but returned to England in 1516 with the Italian Andrea Ammonio.

While in England in 1516, Erasmus and Ammonio drew up a petition seeking papal dispensation to cure several of Erasmus’ legal disabilities, such as his state of being the illegitimate son of a priest. This particular legal disability made it impossible for Erasmus to receive a benefice. Other important items from which Erasmus sought relief were his status as a monk from the monastery in Steyn, which required him to live in Steyn, and his donning of the distinctive clothing of the Augustinian Canons. Pope Leo X approved of Erasmus’ petition and Erasmus was finally released from his monastic orders with the other legal disabilities being cured in 1517.

After reading Luther’s three texts put out in 1520, Erasmus became alarmed by the divisions in the church and began warning his friends against Luther. For a brief time, Erasmus went to Basel to escape the furor and pressure to speak out against Luther. Finally, in 1524, after years of cautioning his friends and students against embracing Luther’s works, Erasmus published an attack on a central doctrine of Luther’s theology, De libero arbitrio (On Free Will). Erasmus was plagued by intense criticism and accusations of heresy, although this did not cause him to stop his work.

Erasmus settled down in the Netherlands with frequent trips to Basel, where several of his works were published. An advocate of education, Erasmus wrote five treatises on humanist educational theory along with many widely-used textbooks. His treatises and textbooks created the foundation of the traditional humanist education. Although a few have been mentioned in this article, Erasmus wrote a large body of work concerning religion and critiques of the church. Erasmus’ religious writings arguably form the basis for the various Protestant movements in Northern Europe during the Renaissance.

Though Erasmus died on 12 July 1536 in Basel, Switzerland just shy of his seventieth birthday, his quiet, eloquent roar can still be heard echoing throughout the corners of Northern Europe.