Yesterday evening I was browsing through the Walters Art Museum of Baltimore’s collection of illuminated manuscripts. I was viewing a late 14th century Book of Hours, created for the Use of Paris, when I thought I spied a very familiar bird: a Princess of Wales Parakeet or Princess Parrot. Princess Parrots are indigenous to Australia, so I thought that surely there was no way that it could be a Princess Parrot. However, as what happens many an evening, my very own Princess Parrot was perched on my foot at the end of my chaise. He makes an excellent writing buddy.

My Princess of Wales Parakeet, helping me write my book, Anna, Duchess of Cleves: The King’s ‘Beloved Sister’

Parrots and other birds, such as peacocks, are frequently featured in the marginalia of illuminated manuscripts. It also occurred to me that the pigments degraded, making it even less likely to be a Princess Parrot. I thought that the bird could be an Indian Ringneck Parakeet, which have been kept as pets since Roman times. The distinctive ring of the Indian Ringneck Parakeet was missing, though.

Folio 50r of Walters MS W.96, with a parrot in the upper-right corner.

The parrot has a similar orange-red beak to the Princess of Wales Parakeet, a touch of blue on the head and orange eyes.

Close-up of the parrot in Walters MS W.96 and my Princess of Wales Parakeet/Princess Parrot.

Other birds in the manuscript are depicted with great accuracy, such as the Hoopoe, a bird commonly found in Germany and other parts of the Continent. Further on in the manuscript can be found a scene showing shepherds on green hills, leading me to believe that there was not severe pigment degradation in this particular manuscript. Unfortunately, only Raman spectroscopy will be able to determine whether the pigments in the parrot were originally meant to be those colors. 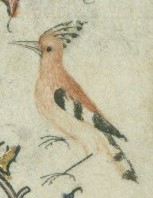 There is one more parrot in the manuscript which I uncovered. It is green and has the same orange beak as the first parrot, though it appears to be missing the blue pigment which can be seen on the first bird. It is missing the characteristic ring of the Indian Ringneck Parakeet, too.

The idea of an Australian parrot showing up in a manuscript is not that far fetched. Dr. Heather Dalton of the University of Melbourne has several publications looking at the existence of cockatoos in European locations during the Renaissance. Here are links to Dr. Dalton’s works, including, Frederick II of Hohenstaufen’s Australasian cockatoo: a symbol of detente between East and West and evidence of the Ayyubid Sultanate’s global reach and another publication by Dr. Dalton, ‘A Sulphur-crested Cockatoo in fifteenth century Mantua: Rethinking symbols of sanctity and patterns of trade.’ Renaissance Studies 28/5 (2014): 676-694. Renaissance Studies 28/5 (2014): 676 – 694. Winner of the ANZAMEMS Inaugural Philippa Maddern Early Career Researcher Publication Prize 2016.

The Avicultural Magazine, 1898, via Wikimedia Commons.

Though further research is certainly needed, I did find it intriguing to see what could be an Australian bird in a 14th century French manuscript. Admittedly, it could be an Indian Ringneck Parakeet without the characteristic ring, or simply a green parrot. I do hope art historians and researchers, such as Dr. Dalton and anyone else willing to take up the mantle, will continue to look at the curious beasts in marginalia. Perhaps there are other birds from far-flung places, or even beasts, which have been hiding in plain sight for centuries. The appearance of these creatures in marginalia would give us further insight into the inter-connectedness of the world and better illustrate the extent of trade networks in the past.

What are your thoughts? Was it late, and I was tired? Was I simply seeing what I wanted to see?