Philippa Avesnes von Hennegau und Holland, or Philippa of Hainault as she is known to English speakers, was Queen Consort of England from 24 January 1328 to 15 August 1369. It is speculated that she was born on 24 June sometime between 1310 and 1315. Her exact date of birth is unknown, though some estimates put her year of birth as 1313. She was the third of nine children and third daughter born to William I, Count of Hainault and Joan of Valois. Only six of the couple’s children lived past the age of three years.

Hainault itself was a very rich area.  Hainault and the areas controlled by her family in the Low Countries rapidly developed into trade centers during Philippa’s lifetime, making her a bride who would bring a lot of money to any marriage. Philippa had a taste for the exotic fabrics and foods which past through her parents’ court.

Coronation of Philippa of Hainault.

Philippa grew up in Salle-le-Comte and Beaumont, where her mother Jeanne Valois introduced Philippa and the court to French literature. Philippa was described as being, “sensibly brought up by her mother.” Philippa possibly had instruction about numbers, or at least was gifted with a good head for numbers. Philippa’s relatives favored both romances and illuminated books. Philippa gifted Edward with a book for their betrothal, which featured an assortment of texts in French and Latin. As queen, Philippa hired an illuminator. Philippa owned a couple illuminated psalters. As a couple, Philippa and Edward had upwards of 160 books between them. Queen’s College, Oxford is named in honor of Philippa and was founded in 1341.

Philippa married Edward III of England at York Minster on 30 January 1328, when she was fifteen to eighteen years old. Edward was born in 1312, making him close in age to Philippa. Her arrival and wedding were overshadowed by the death and funeral of Edward II, who was buried a mere four days before Philippa set foot in England. The building in which her wedding took place was leaking, too. As Queen Consort of England, Philippa was described by her personal secretary Jean Froissart as being of, “..a very good and charming person who exceeded most ladies for sweetness of nature and virtuous disposition” and a, “…most gentle Queen, most liberal, and most courteous that ever was Queen in her days.” Philippa gave birth to a heroic number of children, thirteen in all, between 1330 and 1355, when Philippa was forty to forty-five years old. 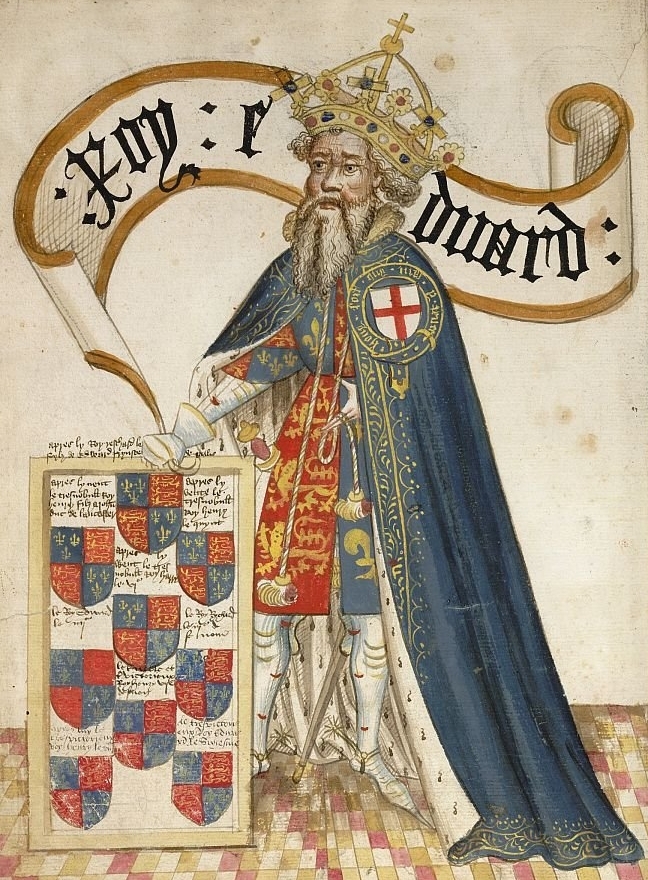 Eight of those children survived to adulthood and married. These included her oldest son and oldest child, Edward, who was known as the Black Prince. He was born in 1330 and died in 1376. Edward’s son became Richard II of England. Her other well-known son was John of Gaunt, whose son became Henry IV of England. 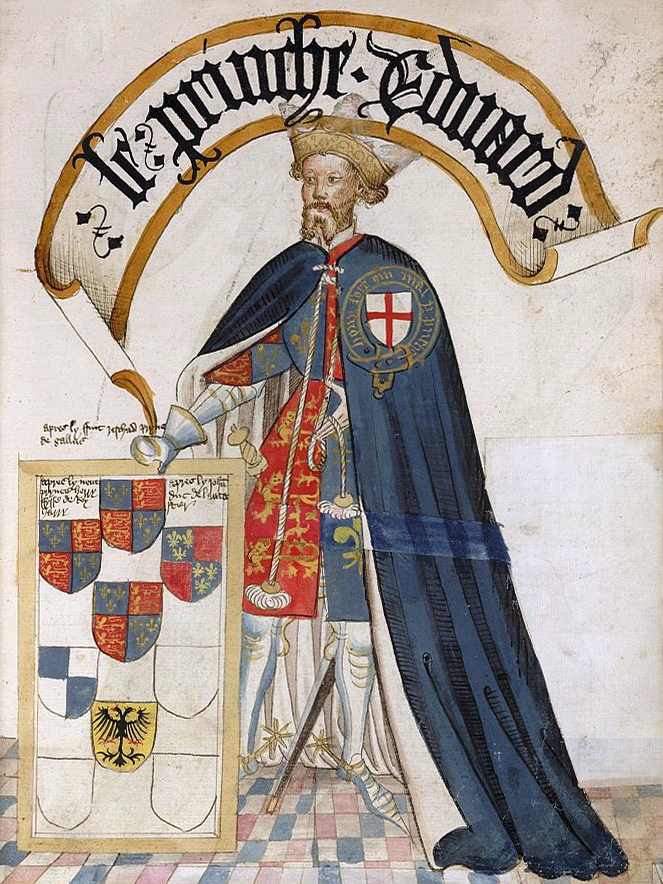 The Black Prince in the Bruges Garter Book, via Wikimedia Commons.

The first few years of Philippa’s time in England were largely spent under the thumb of her mother-in-law, Isabella. Her coronation was delayed by several years, largely due to Isabella not wanting to give up control. During that time, Philippa gave birth to several of her children and developed her characteristic figure, which is depicted both in Philippa’s effigy in Westminster and in the Black Book of the Garter, commissioned by Henry VIII in 1534. Lucas Horenbolte was the illuminator, and he likely used the effigies of both Philippa and Edward as models when creating the full role of Knights of the Garter from its inception between 1344 and 1348, and during the reign of Henry VII. 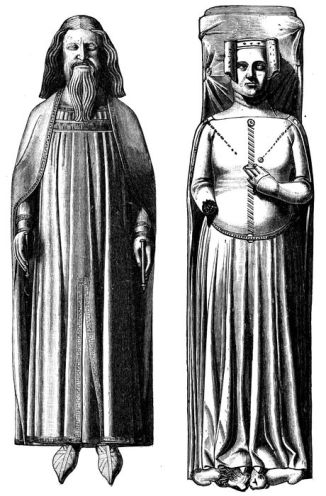 Edward III’s and Philippa of Hainault’s effigies in Westminster (L) and an illumination of Philippa as Lady of the Garter in the Black Book of the Garter (R).

Philippa gave birth to most of her children during the years of 1332 to 1337, at a time when Edward III was at odds with his brother-in-law, King David of Scotland. Philippa accompanied her husband in 1332 when he went to face the Scots. During this time, Philippa’s lodging was attacked. She was later rescued by Edward.

Philippa took great interest in managing her accounts and lands efficiently. To that end, she was not afraid to go after those illegal hunting or felling trees on her lands. She launched a series of lawsuits to recover the value of these offenses in 1337 and 1347. She was known to collect rents on her lands promptly. The queen was constantly short of money during her reign because of her contributions to Edward, who himself was in great debt from the run-up to the Hundred Years War. The situation was so desperate that Edward  pawned his crown whilst Philippa’s was held as security for 5,500 florins by a Cologne merchant.

Philippa also found herself caught up in an international struggle with her sisters over who had right to her parents’ lands in Hainault, a result of the recent Salic Law which only allowed males to inherit. During a visit by the English royal family to the Continent, the French attempted to seize Hainault in 1340, but were thwarted by the English; a truce was established nine months later. Philippa spent most of the 1340s travelling about England, and to France and other areas on the Continent. She worked hard to secure advantageous matches for her daughters. Philippa acted as regent in 1346 whilst Edward III was fighting on the Continent, and famously intervened on behalf of six Burghers of Calais in 1347. Edward besieged Calais for eleven months but the French king refused to give in, leading to starvation in Calais. Edward stated he would stop his siege if six burghers would give themselves up, with execution to follow. The pregnant Philippa intervened, worried that it would be an evil omen for Edward to execute innocent men whilst she was with child. Edward spared the burghers. Sadly, Philippa’s infant and two of his siblings died of the Black Plague in 1348. 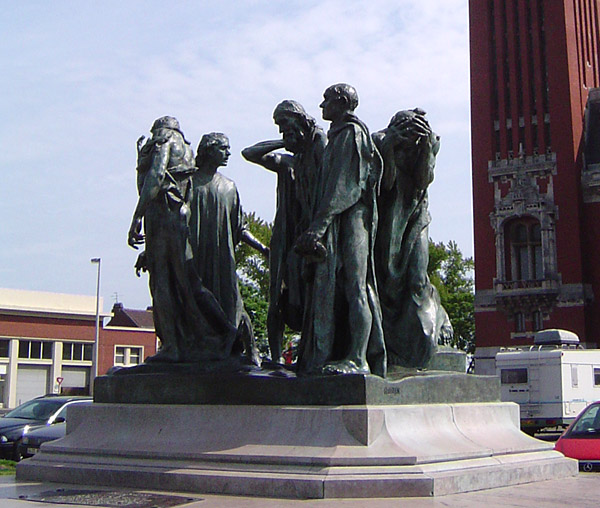 Sculpture of the Burghers of Calais by Auguste Rodin; image via Wikimedia Commons.

In 1350, Philippa watched as her oldest son Edward, the Black Prince besieged the Spanish in a naval attack to reclaim ships which the Spaniards took earlier. Philippa and her ladies were staying at a convent in Winchelsea, where they had full view of the battle. The Black Prince was aboard a galleon called the Cog Thomas. During the vicious fight, several ships were broadsided and the Cog Thomas sank, but not before the Black Prince made a daring escape. Philippa watched as the Black Prince’s household galley, La Salle du Roi, was almost overtaken by a Spanish vessel before a Flemish squire who had sneaked aboard the enemy ship cut the Spanish ship’s rigging, allowing La Salle du Roi to sail away safely.

Philippa had her last child in 1355. She named this child Thomas. Two years after his birth, Philippa, now in her forties, dislocated her shoulder. Beyond that and the strain of numerous child births, Philippa was rather healthy and active until she suffered from dropsy in 1367. She fell ill at some point in 1369, and succumbed to her illness and fatigue on 15 August 1369. Her husband Edward and youngest on Thomas were with Philippa at Windsor when she passed away.

Philippa’s secretary, Jean Froissart, outlived her and gave the following lengthy description of her death and reactions of her loved ones:

“When the good Lady perceived her end approaching, she called to the King and extending her hand from under the bedclothes, put it into the right hand of the King, who was very sorrowful at heart, and thus spoke. ‘We have enjoyed our union in happiness, peace, and prosperity , I entreat therefore of you on our separation that you will grant me three requests.’ The King with sighs and tears replied, ‘My Lady ask, whatever you request shall be granted.’ ‘My Lord, I beg you will acquit me of whatever engagements I have entered into with merchants for their wares as well on this as on the other side of the sea. I beseech you also to fulfil whatever gifts or legacies I may have left to churches here or on the continent where I have paid my devotions as well as what I may have left to those of both sexes who have been in my service. Thirdly, I entreat that when it shall please God to call you hence you will not choose any other sepulcher than mine and will lie by my side in the sepulcher in Westminster.’ The good King in tears replied, ‘Lady, I grant them!’ Soon after the good Lady made the sign of the Cross on her breast and having recommended to God the King and her youngest son Thomas, who was present, gave up her spirit, which I firmly believe was caught by the Holy Angels and carried to glory in Heaven, for she had never done anything by thought or deed which could endanger her losing it.”

So ended the interesting life of Philippa of Hainault, who was buried on 9 January 1370.

5 thoughts on “Philippa of Hainault”