In the Middle Ages, rumour spread that there was a mythological zoophyte known as the Scythian Lamb or the Borametz. Herodotus, from the fifth century BCE and Theophrastus of the third century BCE wrote of the Scythian Lamb, bolstering credibility that such a thing existed. An additional source for the rumour was found in a Jewish text from 436 called, Talmud Ierosolimitanum. What was the Scythian Lamb? 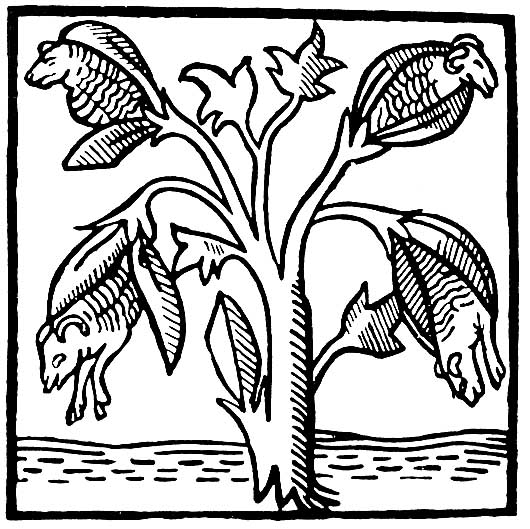 In the Tudor era, Julius Caesar Scaliger, a French scholar born in Venice,  wrote about the Scythian Lamb in a book published in Frankfurt around 1557 called, Exotericarum Exercitationum Liber XV criticizing the report of his contemporary Gerolamo Cardano, who also published a book in 1557, this time in Nurnberg, called De Rerum Natura, gave a purported truthful account of the Scythian Lamb. By twist of fate, Scaliger’s criticism and mention of the Scythian Lamb was interpreted as support of Cardano’s work. And just like that, Scaliger became the champion of the Scythian Lamb. Jean Bauhin, a Swiss botanist who lived in the late sixteenth to early seventeenth century, also claimed the existence of the Scythian Lamb, which was recorded in his post-humus publication, Historia Plantarum Universalis Nova et Absolutissim.

The Scythian Lamb was, “a zoophyte (plant-animal or vegetable lamb) which [grew] from the ground on a stem attached to its navel.” (Carruba, “Engelbert Kaempfer,” 43)  Other than the curious way in which it was cultivated, the Scythian Lamb was in all other respects a perfectly normal lamb with fluffy wool, four legs, and blood coursing through its veins. “The Lamb of Scythia or Tartary feeds on the grass about it and is a prey for wolves, though not for other carnivores.” (Carruba, “Engelbert Kaempfer,” 43)  There were two types of Scythian Lambs, with one sprouting fully-formed lambs and the other producing pods in which the newborn lambs were formed before the pods broke open to expose them.

A poet and courtier at the court of Henri of Navarre, Guillaume de Salluste du Bartas described the Scythian Lamb in a poem he wrote around 1587, saying,

But with true beasts, fast in the ground still sticking
Feeding on grass, and th’ airy moisture licking,
Such as those Borametz in Scythia bred
Of slender seeds, and with green fodder fed;
Although their bodies, noses, mouths, and eyes,
Of new-yeaned lambs have full the form and guise,
And should be very lambs, save that for foot
Within the ground they fix a living root
Which at their navel grows, and dies that day
That they have browzed the neighboring grass away.
Oh! Wondrous nature of God only good,
The beast hath root, the plant hath flesh and blood.
The nimble plant can turn it to and fro,
The nummed beast can neither stir nor goe,
The plant is leafless, branchless, void of fruit,
The beast is lustless, sexless, fireless, mute:
The plant with plants his hungry paunch doth feede,
Th’ admired beast is sowen a slender seed.”

Bauhin gives the best full description of the Scythian Lamb, saying that,

“In Tartary there are seeds which are like the seeds of gourds, only shorter in size, which grow and blossom, like a stem, to the navel of an animal which is called a Borametz in their language, i.e., ‘lamb,’ because it resembles a lamb in all its limbs, from head to foot; its hooves are cloven, its skin is soft, its wool is adapted for clothing, but it has no horns, only hairs on its head, which grow and are intertwined like horns. Its height is a half a cubit and more. According to those who speak of this wondrous thing, it taste is like the flesh of fish, its blood as sweet as honey, and it lives as long as there is herbage within reach of the stem from which it derives its life. If the herbage is destroyed or perishes, the animal also dies away. It has rest from all beasts and birds of prey, except the wolf, which seeks to destroy it.”

This generally-accepted description of the Scythian Lamb persisted through the eighteenth century, when it finally seems to have died out. How on earth did such an improbable rumour last for so long? What did Theophrastus and Herodotus really describe?

As it turns out, Theophrastus and Herodotus were describing a cotton plant. Specifically, they were likely describing Levant cotton, or Gossypium herbaceum. Theophrastus recorded the plants as being,

“wool-bearing trees, which grow there abundantly, have leaves like the vine, but smaller. They bear no fruit, but the pod containing the wool is about the size of an apple, while it is closed, but when it is ripe it opens; the wool is then gathered from it and woven into clothes.”

How could the description of a cotton plant lead to such a fantastical myth which endured for years? A simple error in translation. In Greek, the language in which Theophrastus and Herodotus wrote, the word for “apple” and “sheep” were the same.

5 thoughts on “The Scythian Lamb, or the Delectable Lamb-Vegetable of Tartary”