On Sunday 15 January 1559, Elizabeth Tudor became Elizabeth I, Queen of England, Ireland, and France, Defender of the Faith. Elizabeth had just turned 25 years old that past September. She picked that date under the advice of the court astrologer, John Dee, By the time of her coronation, Elizabeth had outlived her mother, father, legitimate and confirmed illegitimate half-siblings, her father’s first wife, and all four of her stepmothers. The last of Elizabeth’s stepmothers to pass away, Anna of Cleves, died a year and a half before in July 1557. 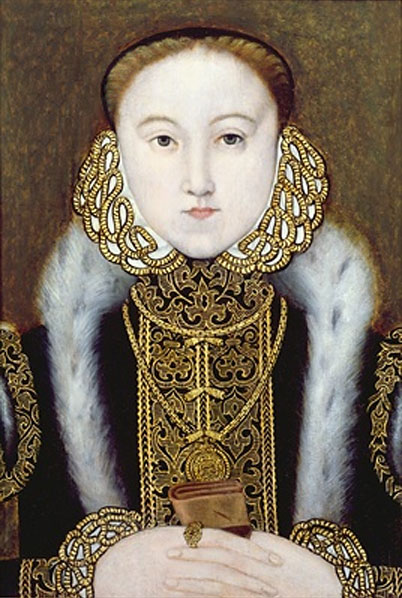 It is difficult to understand what was going through the young woman’s mind after she found out in November 1558 that her elder sister Mary I had passed away, leaving Elizabeth as the next person in the line of succession. Elizabeth was the third woman on the island that century to be made Queen Regnant in her own right. The first woman, Mary, Queen of Scots, was all of sixteen years old and still at the French court. Elizabeth arguably watched the behavior of her sister Mary and her cousin Mary when making decisions for her own reign.

It is frequently said that Elizabeth never married because her own mother, Anne Boleyn, and a relative, Katheryn Howard, were executed by Elizabeth’s father, Henry VIII. Additionally, Elizabeth witnessed the poor treatment of her sister Mary, and saw her last stepmother, Catherine Parr, die days after giving birth to her only child. While that is certainly possible that these traumatic events completely shaped Elizabeth’s outlook, it underestimates the influence of anyone else in Elizabeth’s life before she became queen.

Of course, there was Kat Ashley, who effectively raised Elizabeth. There is also Anna of Cleves, who remained a figure at court throughout the reign of Henry VIII and made appearances at court during the reigns of Edward VI and Mary I. Although written evidence is scant, there is no reason to believe that Elizabeth and Anna were not friendly with each other, and the two may even have been close. If so, Elizabeth could have looked to Anna’s example of a noblewoman getting along well enough without a husband.

Either way, one is left wondering the feelings and thoughts going through Elizabeth’s head at her coronation 461 years ago. With all of her known immediate family members (this, of course, excluding the possibility that her aunt Mary Boleyn’s children were actually Elizabeth’s half-siblings) deceased, the shadow of her mother’s downfall, and now her dramatic rise to power, it could not have been an easy day for Elizabeth.

Elizabeth chose to have her coronation at Westminster Abbey, and she had the service performed in both Latin and English. From this, the tone of Elizabeth’s religious policy could be gleaned.

Her coronation was described in part as,

“On Sunday, 15th January, mass was sung for the coronation in Westminster Abbey, which was decorated with the handsomest and most precious tapestries that were ever seen, they having been purchased by Henry VIII …

The Queen was received under the canopy by the Archbishop and another Bishop, they having previously perfumed her with incense, giving her the holy water and the pax, the choristers singing; then the Earl of Rutland followed her Majesty with a plain naked sword without any point, signifying Ireland, which has never been conquered; then came the Earl of Exeter with the second sword; the third was borne by Viscount Montagu; the Earl of Arundel, having been made Lord Steward and High Constable for that day, carried the fourth (sword) of royal justice, with its gilt scabbard loaded with pearls. The orb was carried by the Duke of Norfolk, Lord Marshal, and in advance were knights clad in the ducal fashion, carrying the three crowns, they being the three Kings-at-arms; they bore the three sceptres, with their three crowns of iron, of silver, and of gold on their heads, and in their hands three naked iron swords, signifying the three titles of England, France, and Ireland. In this way they proceeded to the church, the Queen’s long train being carried by the Duchess of Norfolk, after whom followed the Lord Chamberlain, upon purple cloth spread on the ground; and as her Majesty passed, the cloth was cut away by those who could get it …

On her Majesty’s arrival at the church, all the bells in London ringing, she ascended the lofty tribune erected between the high altar and the choir, being thus exhibited to the people, of whom it was asked if they wished her to be their crowned Queen? Whereupon they all shouted “Yes;” and the organs, fifes, trumpets, and drums playing, the bells also ringing, it seemed as if the world were come to an end.

Descending from the tribune, the Queen placed herself under her royal canopy; and then the choristers commenced the mass … the Bishop of Carlisle commenced the coronation according to the Roman ceremonial.”

Elizabeth was described as being so full of smiles and joy after the coronation that she, “exceeded the bounds of gravity and decorum.” Although we do not know what was going through her head, we know Elizabeth was elated. She enjoyed her coronation feast until 1:00 AM the next day.