Mary and Elizabeth, the two Tudor queens regnant, each faced serious military campaigns against them. In Mary’s case, Sir Thomas Wyatt the Younger started an uprising which threatened Mary’s reign. There is debate amongst historians as to the cause of the uprising, however at least Mary believed it was due in part to her impending marriage with Philip II of Spain. Mary gave a rallying speech to her government, hoping that they would continue to support her against the uprising. 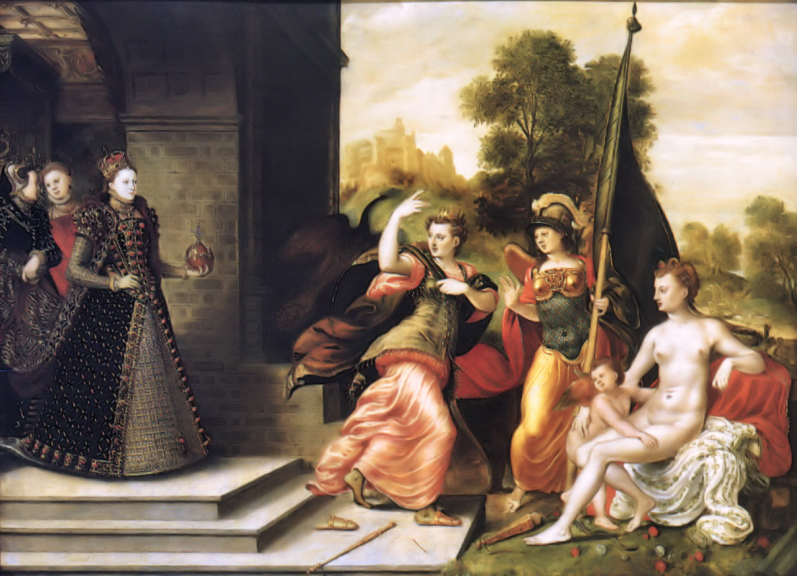 Elizabeth I and the Three Goddesses, by Hans Eworth c. 1569, via Wikimedia Commons.

Wyatt’s Rebellion took place in January 1554, with the rebellion not making it much farther than the plotting phase. Parliament asked Mary in November of 1553 to take an English husband, which she refused. The government was afraid that if Mary took a Spanish husband, or other non-English husband, that England would be overtaken by the foreign influence. Choosing an English husband seemed to be the safer choice, however Mary had her heart set on a foreign spouse.

In August 1588, Elizabeth I prepared her troops at Tilbury for an invasion by her former brother-in-law Philip II. Elizabeth spent a substantial amount of time during the Armada invasion at St James’s Palace, where it is rumored that Mary I’s heart is buried under the altar. It is unknown what exactly Elizabeth wore when she greeted and exhorted her troops at Tilbury, and it is unknown what exactly she said. That fateful day has attained a legendary quality, with some descriptions of Elizabeth’s attire and words making her sound like the embodiment of the goddess Athena. Athena is the Greek goddess of wisdom and military strategy.

If you would like to hear the two sisters’ speeches, follow this link to my podcast, Tudor Speeches

5 thoughts on “Two Battles, Two Queens, Two Speeches: Mary I and Elizabeth I”