On 24 March 1603, Elizabeth I died. She was approaching the age of 70 years. “It is not my desire to live or to reign longer than my life and my reign shall be for your good,” said Elizabeth to her parliament in 1601. Upon one of the many times parliament questioned Elizabeth about her plan of succession, she stated, “I know I am but mortal and so therewhilst prepare myself for death, whensoever it shall please God to send it.” And send it, God eventually did. 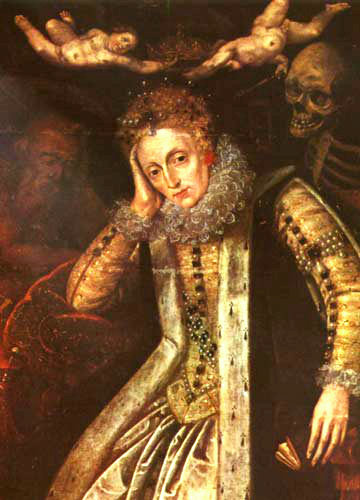 24 March, 1603. Elizabeth I, the Virgin Queen, England’s Gloriana and daughter of the great Henry VIII by the ill-fated Anne Boleyn, passed away peacefully in her sleep at Richmond Palace. She was 69 years old and had reigned for almost 45 years.

Elizabeth’s passing was announced later on that morning, though truthful rumors of the queen’s declining health had circulated for weeks. Elizabeth’s faithful ladies were waiting at Richmond Palace, in the Coffer Room. Robert Cecil, who served as Elizabeth’s chief minister after his father’s death in 1598, first proclaimed the grave news at Whitehall, then St. Paul’s, and finally at Cheapside Cross. Upon hearing the news, the expectant crowd was stunned into silence.

“This morning, about three o’clock her Majesty departed from this life, mildly like a lamb, easily like a ripe apple from a tree… Dr Parry told me he was present, and sent his prayers before her soul; and I doubt not but she is amongst the royal saints in heaven in eternal joys.”

Elizabeth’s funeral took place on 28 April 1603. In addition to the nobility, around two hundred poor persons followed the funeral procession. There were over 1,000 mourners at her funeral. The streets were packed with her former subjects, who had one last glimpse of Gloriana through viewing her life-like effigy, which lay atop her coffin. Elizabeth’s effigy was dressed in her robes of state, bearing her sceptre and wearing her crown. John Stowe, an attendee of the funeral, recorded:

“Westminster [Abbey] was surcharged with multitudes of all sorts of people in their streets, houses, windows, leads and gutters, that came to see the obsequy, and when they beheld her statue lying upon the coffin, there was such a general sighing, groaning and weeping as the like hath not been seen or known in the memory of man, neither doth any history mention any people, time or state to make like lamentation for the death of their sovereign.”

Godfrey Goodman, bishop of Gloucester during the reign of James I and VI, wrote of the reaction to Elizabeth’s passing:

“After a few years, when we had experience of a Scottish government, the Queen did seem to revive; then was her memory much magnified: such ringing of bells, such public joy and sermons in commemoration of her, the picture of her tomb painted in many churches, and in effect more solemnity and joy in memory of her coronation than was for the coming-in of King James.”

“You know all my former steps: good knight, rest content, and give heed to one that hath sorrowed in the bright lustre of a court, and gone heavily even on the best-seeming fair ground. Tis a great task to prove one’s honesty, and yet not spoil one’s fortune. You have tasted a little hereof in our blessed Queen’s time, who was more than a man and, in troth, sometimes less than a woman. I wish I waited now in her Presence Chamber, with ease at my foot, and rest in my bed. I am pushed from the shore of comfort, and know not where the winds and waves of a court may bear me.”

A grand monument was erected by James I in honor of Elizabeth, it was even more grand than the monument he would have installed for his own mother, Mary, Queen of Scots. A very lengthy Latin inscription was included on Elizabeth’s tomb, with a portion of it saying:

“Sacred to memory: … Elizabeth, a most prudent governor 45 years, a victorious and triumphant Queen, most strictly religious, most happy**, by a calm and resigned death at her 70th year left her mortal remains, till by Christ’s Word they shall rise to immortality, to be deposited in the Church [the Abbey], by her established and lastly founded.”

Elizabeth’s shuffling off of her mortal coil left as much of a mark as did her reign. Sorely missed by her people, Elizabeth’s memory lived on actively long after her death. To this day, her legacy evokes memories of a splendid court, a strong prince, and a loving defender of the English people.

** Discussion topic: is it possible that Elizabeth being described as “most happy” in her epitaph is an allusion to her mother Anne Boleyn, whose motto was, “the most happy?” What do you think?

16 thoughts on “Sorrow in the City: Reactions to the End of an Age”