In case you missed it on 3 May 2018 at http://queenanneboleyn.com/2018/05/03/margaret-york-duchess-consort-burgundy-heather-r-darsie/

On 3 May 1446, the future Edward IV of England and his parents welcomed a baby girl. She was named Margaret, possibly after Margaret of Anjou, who was Queen Consort of England at the time. Margaret of York’s life was greatly influenced by her brother Edward, and her prominence rose with his. After her marriage and move to Burgundy, Margaret continued to support her family in England and remain a prominent figure in Burgundy for the rest of her life. 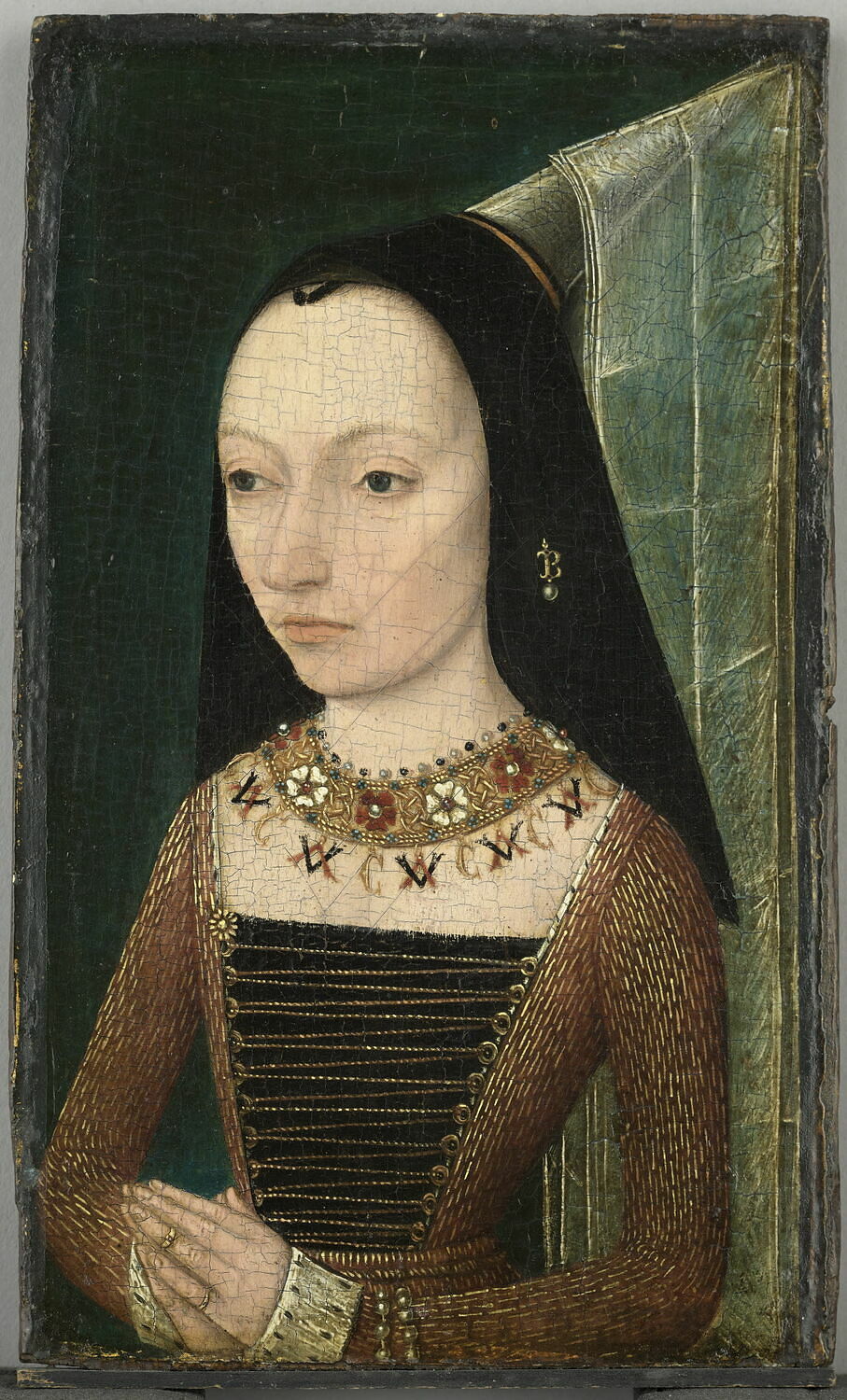 Margaret of York, via Wikimedia Commons

Margaret later became Duchess of Burgundy. A marriage between Margaret and the widowed Charles the Bold of Burgundy was first considered in 1454, when Margaret was roughly six years old. Charles had been unlucky in marriage and was a widower twice over by the time Charles was about thirty-two. Charles’ first wife, whom he married in 1440 when he was but seven years old, died in 1446. Given the tender age of the groom, the marriage was never consummated. The marriage between the Burgundian Charles and the French Princess Catherine, daughter of King Charles VII and sister of the future Louis XI, was a result of the Treaty of Arras from 1435.

The Treaty of Arras was between Henry VI of England, the aforementioned Charles VII of France, and Duke Philip the Good of Burgundy. Philip was Charles the Bold’s father. Entered into at the close of the Hundred Years’ War, the Treaty included provisions that Charles the Bold could marry only a French princess. As such, Charles’ first and second wives were indeed French. The teenager did not seek a new bride until 1454.

Margaret of York was briefly considered as a match for Charles. Margaret’s father Richard Plantagenet, third Duke of York, had temporarily taken charge of England due to a bought of insanity exhibited by Henry VI. However, such a marriage would of course violate the Treaty of Arras, so Charles married Isabella of Bourbon. Charles, who was still but the Count of Charolais, was smitten with his Bourbon wife.

Isabella of Bourbon borne Charles one child, a daughter named Mary of Burgundy. Sadly, Isabella died of tuberculosis in September 1565, at the age of thirty-one. After Isabella’s death, Charles desired a new wife who would hopefully bear him a son.

By 1465, Margaret’s surviving older brother was King Edward IV of England because of a series of battles throughout the late 15th century that became known as the Wars of the Roses. Louis XI was King of France, and he offered his four-year-old daughter Anne de Beaujeu to Charles. Charles and Louis XI had been struggling over territory, and the match between Charles and Anne came out of the Treaty of Conflans, which was signed in October 1465. As part of her dowry, Anne would bring the territory of Ponthieu, but Charles was able to gain control of Ponthieu on his own. Probably not wanting to wait for Anne to come of age, Charles did not make much affirmative noise about the match.

The nineteen-year-old Margaret, a duchess in her own right and sister of the King of England was more appealing. Unfortunately, Charles was still bound by the Treaty of Arras. Nevertheless, Charles was interested in marrying Margaret. Edward IV sent an ambassador to Burgundy to negotiate a marriage between Margaret and Charles, and an additional marriage between Edward IV’s brother, George, Duke of Clarence, and the young Mary of Burgundy. The second proposition never came to fruition.

Louis XI of France was vehemently against an Anglo-Burgundian alliance, and there were still the provisions of the Treaty of Arras to contend with. Margaret wound up being betrothed in 1466 to the rebel would-be-king, Peter the Constable of Portugal. As a relative of Isabella of Burgundy, Charles’ mother, a marriage between Margaret and Peter would have indirectly furthered Anglo-Burgundian interests.

The fetters of the Treaty fell away upon the death of Charles’ father Philip the Good in 1467. Margaret of York wed Charles and became Duchess Consort of Burgundy in the summer of 1468. This marriage greatly vexed Louis XI, who tried his best to encourage the Pope to deny a papal dispensation allowing the distant cousins to marry. Both Margaret and Charles were descendants of John of Gaunt. When that did not work, Louis XI sent ships to try and capture Margaret and her party as they sailed to Burgundy. That, of course, failed.

On 26 June 1468 the bride first met with her new mother-in-law, Isabella of Burgundy, and eleven-year-old step-daughter, Mary of Burgundy, and the three of them remained close the rest of their lives. Isabella of Portugal, Duchess of Burgundy, died in December 1471 and Mary of Burgundy died in March of 1482. Margaret met her husband the next day. Margaret and Charles were wed quite early in the morning on 3 July 1468, between 5:00 AM and 6:00 AM. After her marriage, Margaret became duchess of Burgundy, of Lotharingia, of Limbourg, of Brabant, of Luxembourg, and of Guelders; countess of Flanders, of Artois, of Hainault, of Holland, of Zeeland, of Namur, of Zutphen, and of Franche Comté; and the lady of Friesland, of Salins, and of Malines.

The couple left for Bruges, with Margaret a few hours behind Charles, to make their Joyous Entry into Bruges. A “Joyous Entry” refers to the official entry of a royal personage or personages into Brabant or Flanders. Margaret’s Joyous Entry was sumptuous, to say the least. Though raining, Margaret sparkled in her gilded litter drawn by white horses. The twenty-two-year-old happily waived to the burghers as she passed. Within Bruges, the city was decorated with flowers, torches, artificial trees, the arms of the newly-wedded couple, and other carefully-planned adornments. The fountains flowed with wine, and both Margaret’s and Charles’ mottoes were displayed throughout Bruges. Margaret’s motto was, Bien en aviengne or “may good come of it,” and Charles’ was, Je l’ay emprins or “I have undertaken it.”

To honor Margaret of York, Bruges held what was known as the Tournament of the Golden Tree. This tournament is still celebrated every five years in Bruges, with the most recent celebration held in 2017 and the next celebration likely in 2022. The inaugural Tournament of the Golden Tree was part of a ten-day celebration for Margaret and Charles. Margaret and Charles wore coronets denoting their status. On a fascinating note, Margaret of York’s crown still exists and is held in Aachen. It is one of two English crowns to survive the Civil War. The Palatine Crown of Princess Blanche of England, roughly ninety years older than Margaret’s crown, and is displayed at the Munich Residenz.

Coronet of Margaret of York, Photo by CEphoto, Uwe Aranas

Margaret’s new husband was still actively at war with Louis XI. Louis XI came to Charles’ and Margaret’s territories in October of 1468 to negotiate, and things ended on a mostly positive note. Another treaty was signed, which was broken a year later by Louis. Relative peace was acquired for Burgundy in 1471 and lasted until 1474. It was a much different story in England for Margaret’s brothers.

In 1469, and very simply put, Edward IV and the future Richard III fled England for Flanders because of the agitations made by their brother George, Duke of Clarence and Richard Neville, Earl of Warwick. Warwick had instigated a revolt that included signing a treaty with Louis XI, agreeing to eschew any claims by England to the throne of France. Margaret tried her best to reconcile the brothers but was unsuccessful. Furthermore, George was in favor an alliance with France instead of Burgundy. Eventually, Edward managed to regain control of England in 1471 and the good relationship with Burgundy continued.

Margaret’s husband spent the rest of his life, from 1474 to 1477, trying to expand their territories. Charles even went so far as to request that the contemporary Holy Roman Emperor crown Charles a king, though the Emperor disappeared from Burgundian territories shortly before the event at Trier in 1473. Warring his way across France, Lorraine, and Switzerland, Charles was brutally killed at the Battle of Nancy on 5 January 1477. Margaret was a widow at the age of thirty and had never borne children. She may not have been given much of a chance to have children because her husband was so often absent and involved in skirmishes.

Margaret maintained her interest in England throughout the 1470s, and perhaps can be credited in part with patronizing William Caxton. William Caxton learned to operate a printing press whilst abroad in Cologne, and then set up a functioning press in Bruges in around 1474. There, he published, The Recuyell of the Historyes of Troye, the first book published in English. Caxton also published, The Game and Playe of the Chesse, translated from the French. A couple more books were published in Bruges by Caxton before he returned to England in 1476.

Margaret maintained good relationship with her stepdaughter, Mary of Burgundy. Mary of Burgundy became the wife of the Holy Roman Emperor Maximilian I. Mary died due to complications from a riding accident in 1482 at the young age of twenty-five, after her horse threw Mary into a ditch, then landed on Mary. Mary’s back was broken and she succumbed to complications from her injuries weeks after the accident. Margaret of York and her stepson-in-law, Maximilian I, sought to care for Mary’s children Philip and Maria, but the Estates General of Flanders refused to assist Margaret.

The Estates signed the 1482 Treaty of Arras with King Louis XI of France. A portion of the Treaty committed the infant Margaret of Austria to Louis XI’s court. Margaret could not gain custody of Mary’s son Philip until 1484. After Margaret had custody, she raised Philip at her court. Throughout the rest of Philip’s minority, Margaret enjoyed a good relationship with his father and her former son-in-law, the Holy Roman Emperor Maximilian I.

Margaret of York’s charges became important for Continental politics of the time. Margaret of Austria eventually became Regent of the Netherlands. Margaret of Austria held the position first from the age of about twenty-seven to about thirty-five (1507 to 1515) and one more time from the age of about thirty-nine to her death at the age of fifty (1519-1530). Philip the Handsome married Juana of Castile; one of their children became the Holy Roman Emperor Charles V. Margaret of York is remembered as an intelligent and politically shrewd woman. Margaret lived until she was fifty-seven, dying on 23 November 1503.

9 thoughts on “Margaret of York, Duchess Consort of Burgundy”