Please note that this article originally appeared on Medieval Archives.

Wilhelm was born on 28 July 1516, the third living child and only son of Maria of Jülich-Berg and Johann III of Cleves- Mark. He was a mere thirteen months younger than his sister Anna, born 28 June 1515, and over four years younger than Sybylla, born 17 January 1512. As the only son and heir, Wilhelm was carefully educated and groomed for eventually becoming duke of the powerful United Duchies of Jülich-Cleves-Berg. 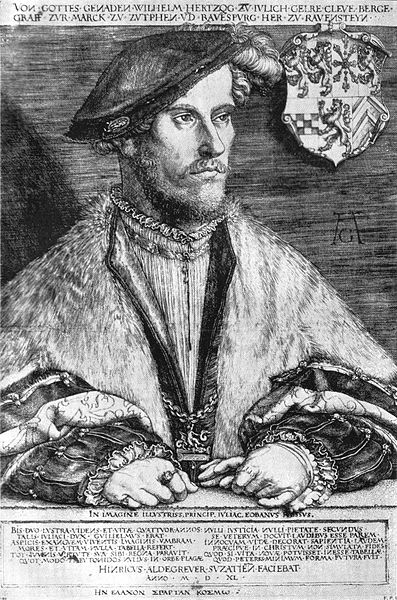 Wilhelm V, circa 1540, by Heinrich Aldegrever. Via Wikimedia Commons.

As fortune would have it, Wilhelm was already well-connected in the German portion of the Holy Roman Empire by virtue of his oldest sister Sybylla’s marriage to Johann Friedrich, Elector of Saxony. Wilhelm eagerly sought to extend his fortunes when he was approached by Henry VIII of England’s ambassadors, who were seeking a fourth bride for the aging Henry. After a short period of negotiations, Henry decided upon Wilhelm’s elder sister Anna as he next Queen Consort of England. Wilhelm had to put up with sass from Anna while she reminded him that both he and Sybylla were now beneath her in rank, as she was queen of a kingdom while Wilhelm and Sybylla lorded over mere duchies.

Trouble with the Holy Roman Emperor Charles V began in late 1539, when Charles V tried to persuade Wilhelm to hand over the Duchy of Guelders. Seeking to expand his power and totally surround the Holy Roman Empire, Wilhelm sought a bride in France. Wilhelm married Francis I of France’s niece, Jeanne d’Albret, in June 1541. After a failed military alliance with France, Wilhelm and Jeanne’s marriage was annulled. He next married Charles V’s niece through Charles’ brother Ferdinand, the Archduchess Maria of Austria.

Maria of Austria and Wilhelm went on to have six children, two sons and four daughters. Wilhelm’s younger sister Amalia was instrumental in raising Wilhelm’s daughters, upon whom Amalia pressed the Lutheran religion.  The youngest of Wilhelm’s daughters eventually returned to the Catholic fold. Wilhelm’s sons were raised strictly as Roman Catholics. Wilhelm adhered to Desiderius Erasmus’ humanist teachings, to which Wilhelm was introduced as a teenager. This did not stop Wilhelm from expelling the Jews in 1554, but he was tolerant of the Reformist teachings. Wilhelm’s eldest son died of illness, leaving Wilhelm’s unstable younger son, named Johann Wilhelm, as the heir of Jülich-Cleves-Berg upon Wilhelm’s death.

Wilhelm lived to the age of 75 years on 5 January 1592. During his long life, Wilhelm attracted many great minds to his court and provided support for others. Wilhelm hired the Renaissance architect Alessandro Pasquilini to renovate the ducal palace in Düsseldorf, which became Wilhelm’s primary residence. Pasquilini was also tasked with rebuilding Jülich. Pasquilini’s pentagonal design of Jülich exists to this day. Additionally, Wilhelm patronized Georg Mercator, a famous cartographer, and attracted other great minds to the City of Duisburg in the 1550s when Wilhelm sought to establish a university there. Duisburg is northwest of Düsseldorf, between Cleves and Düsseldorf. The university never materialized, but Gymnasium, an institution of higher learning, was eventually established. Wilhelm established a Gymnasium in Düsseldorf in 1545, too.

Upon the abdication of Charles V in 1556, Wilhelm was able to carry on being religiously tolerant within the United Duchies. He had a friendlier relationship with his father-in-law, the Holy Roman Emperor Ferdinand I.  For Easter 1558, Wilhelm participated in Protestant worship. Wilhelm spent the rest of his life participating in both Catholic and Protestant forms of worship. He was vehemently against religious sectarianism, and did his best to prevent its spread within his domains.

Wilhelm was afflicted with his first stroke on 30 September 1566, when he was 50 years old. Wilhelm was returning from an Imperial Diet in the City of Augsburg. His right hand and tongue were paralyzed. Wilhelm had another eleven strokes before his death. Wilhelm vacillated between being confined to his chair, mostly speechless, and being able to rise and live life mostly like normal with proper assistance.

After Wilhelm’s first stroke, there was constant worry over the fate of the United Duchies due to unrest in the Netherlands and aggression from Spain. The fear was exacerbated by the death of Wilhelm’s oldest son, as mentioned above, of smallpox in February 1575. Wilhelm’s court returned to being Catholic after 1576, upon the death of Wilihelm’s primary advisors who all died within about 18 months of each other. The Holy Roman Emperor Maximilian II, who was as tolerant as Ferdinand I, was also deceased by late 1576. This loss of support for Wilhelm’s path of religious tolerance also contributed to the United Duchies veering back toward Catholicism. 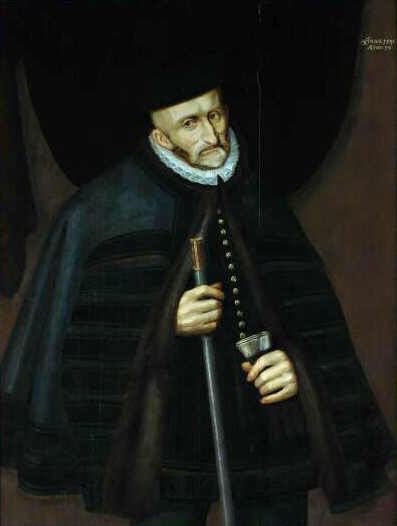 Wilhelm V,  circa 1591 by Johan Malthain. Via Wikimedia Commons.

The last decades of Wilhelm’s life were troubled. He watched his younger son Johann Wilhelm, now his heir, marry Jakobe von Baden in 1575. Johann Wilhelm grew increasingly mentally unstable throughout the 1570s, 1580s, and into the 1590s. The United Duchies were on the fringes of the Truchsess War, with some of Wilhelm’s smaller cities being attacked or pillaged as a result of the Archbishop of Cologne’s actions in the 1580s. The United Duchies suffered the most from 1587 to 1588. Religious unrest grew at court, as well as throughout the Holy Roman Empire.

Wilhelm continued to personally receive ambassadors up until he died, despite being difficult if not impossible to understand due to the numerous strokes he suffered. Wilhelm also fell asleep at dinner occasionally. He finally passed away between 10:00 PM and 11:00 PM on 5 January 1592 in his beautiful ducal palace at Düsseldorf. Wilhelm muttered the word “patience” as he was dying. Wilhelm was buried on 10 March 1592 in St. Lambertus, right by the ducal palace. A grand tomb was erected for him in 1599, and is still standing to this day.