This article originally appeared on the Henry Tudor Society.

In the 16th century there existed powerful groups of soldiers-for-hire in the Holy Roman Empire called “Landsknechte,” which literally means “country servants.” The singular form of the word is, “Landsknecht.” The word was frequently Anglicized into “lance knights” and Gallicized into “lansquenet.” These mercenaries developed into formidable, well-trained soldiers in the late 15th through early 16th centuries.

The Landsknechte were formed due to the need of the Holy Roman Emperor Maximilian I to maintain control over his dominions, including Burgundy which he acquired by the right of his marriage to Mary of Burgundy. Georg von Frunsberg is considered the Father of the Landsknechte. Georg von Frunsberg was born 24 September 1473 in Memmingen, Germany. At the age of roughly 26, Frunsberg was part of the Landsknechte who fought the Swiss knights-for-hire, the Reisläufer, in 1499. Frunsberg also went to Milan to protect the duchy from French invasion. Frundsberg rose to the rank of commander, and participated in campaigns against the Empire’s enemies in 1504, 1509, 1513, 1514, 1521, 1522, and 1525. He passed away on 20 August 1528 in the same place he was born, Mindleheim Castle in Memmingen, Germany.

Maximilian I was elected King of the Romans-Germans on 16 February 1486 and almost immediately set to work gathering Landknechte mercenaries. These foot soldiers were equipped with halberds, pikes, and swords. A small percentage of each regiment was equipped with harquebuses and two-handed swords. They would fight in phalanxes, repelling cavalry attacks. The Landsknechte were trained by Swiss Reisläufer who Maximilian I was able to hire for such purposes. 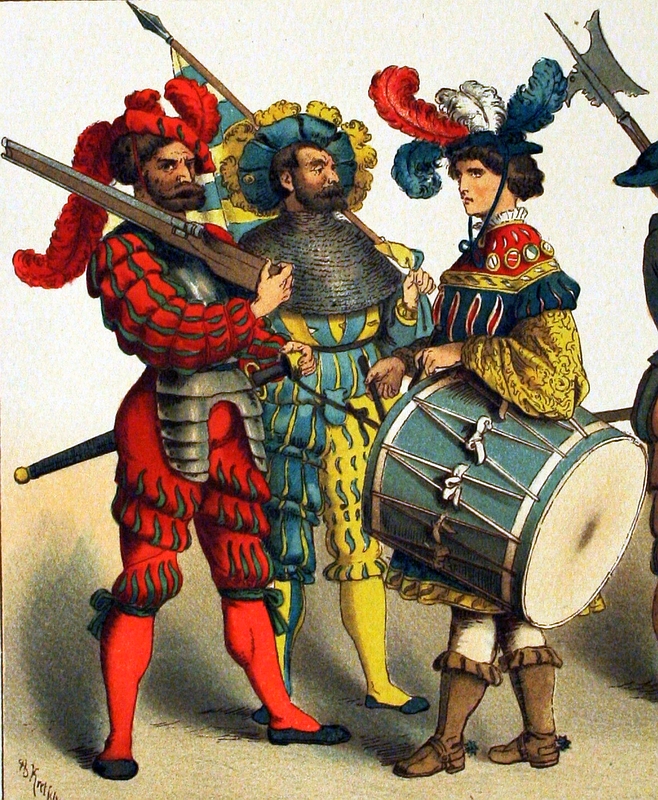 The mercenaries themselves came from all different backgrounds. Some were criminals, others peasants or nobles, all with different motivations stemming from enjoying the adventure to being forced into action by their lord. The Landsknechte had loyalty to no one. They fought for whoever paid them, even if it meant attacking their place of origin. Anyone hiring the Landsknechte always risked mutiny or abandonment if payment was not timely. On top of that, the Landsknechte were known to pillage the victims if they were unhappy with their pay, or force sieges and battles before their money ran out.
The Landsknechte traveled in large groups of attendants and women, often wearing flamboyant clothing because the Landsknechte were exempt from sumptuary laws. It is thought that the style of dress adopted by the Landsknechte influenced European fashion to an extent. The women were an important part of each Fahnlein, or 400-man company, and carried out specific tasks. The women acted as laundresses, seamstresses, cooks, midwives, and money-handlers. The women were assigned hard labor as well, which included digging trenches. The women participated in pillaging, too.

The Landsknechte were very well-organized in the late 15th and early 16th centuries. A Landsknechte regiment was comprised from ten, 400-man Fahnlein, making a regiment approximately 4,000 persons. Each Fahnlein was made up of multiple Rotten, the number of which depended upon the types of soldiers in each Rotten.  Each regiment was led by a colonel, who received his commission from the local lord. A contract was drawn up between the colonel and the lord, spelling out the pay for the soldiers and what the duties of the hired Landsknechte were. Each unit had a leader, and the Landsknechte were known to dispense their own justice amongst their ranks.

The Landsknechte were at their most formidable during the Sack of Rome in 1527. A mutinous force led by the Duke of Bourbon, the pitiless mercenaries chose to march on Rome after not being paid by the Holy Roman Emperor Charles V for their role in his 1525 victory at Pavia. The Landsknechte entered Rome on  6 May 1527 through St Peter’s and the Borgo Santo Spirito, and they with other groups of mercenaries murdered everyone in sight. It did not matter whether the victims were soldiers or civilians. Pope Clement VII barely escaped St Peter’s Basilica for the safety of Castel Sant’ Angelo. This Swiss guard tasked with protecting St Peter’s lost a substantial number of their force in the carnage. Allegedly most of the Swiss Guard were murdered on the high altar within St. Peter’s Basilica. Pope Clement eventually surrendered to Charles V in June 1527.

3 thoughts on “Who were the Landsknechte?”