Please note that this article originally appeared on Tudors Dynasty.

In the 15th century, the word “vrouwenzimmer” slowly entered the German lexicon, becoming a fully-fledged concept by the late 15th to early 16th century. Literally meaning “woman’s room,” the word applied to the secondary court which developed around the women of a noble household. The word “Frau,” now simply meaning a woman or a married woman (for example, Mrs. Jones would be Frau Jones), the word “Frau” used to apply explicitly to a married woman who was the head of a household. Other reasonable translations of Frauenzimmer, given the historical context of the word in Anna of Cleves’ time, would include “women’s lounge” or “mistress’ chamber.”

No detail was spared in regulating a court’s Frauenzimmer. There were contractual arrangements, saying who did what for whom, and how they were compensated for the work. A person could receive anything from food or clothing, to shelter or horses. Money was an option, too. Meal time was very strict, with specific instructions for where each lady sat, who was allowed to eat what, when and how the dishes were presented, and so on. A Frauenzimmer had its own kitchen staff, but it was much smaller than that for the general household. 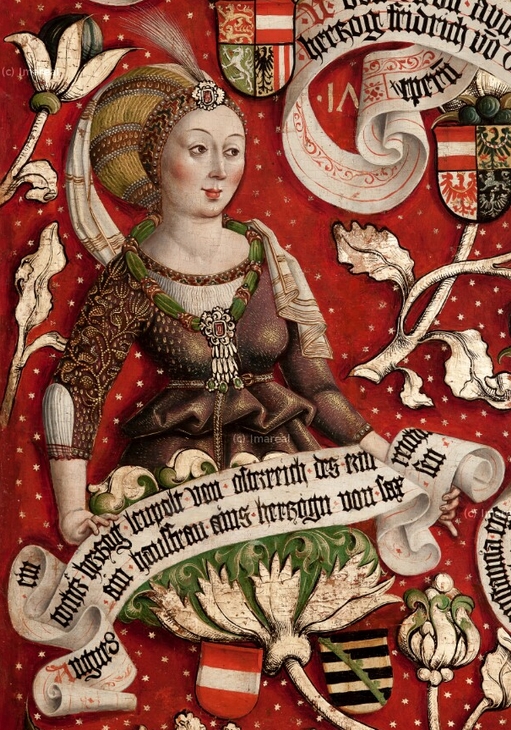 Despite the description of a strict household, ladies in the Frauenzimmer certainly had their fun. Far from being cloistered, the presence of the Frauenzimmer, occasionally used a collective noun referring to the members of the women’s household, was a meaningful source of increased merriment. For example, the chronicler Hans von Schweinichen remarked upon the daily pattern of living at court in Liegnitz, now part of Poland. The Duchess of Liegnitz put on a banquet every night, followed by dancing, which sometimes lasted all night. Of the dances Schweinichen commented, “The music was lovely, the wine good, the Frauenzimmer (here used as a collective noun) beautiful and the company discreet.” Schweinichen goes on to describe the fun had by the Frauenzimmer, which included, “riding, ring-races, music, and dancing.”

The evidence of Anna of Cleves’ exact activities within the Frauenzimmer as a girl and young woman are not known. However, there is evidence that hunting was a pastime enjoyed greatly by both the courts of Jülch-Berg and Cleves-Mark, and that the closely watched Frauenzimmer occasionally partook in these festivities. Anna learned to cook and embroider for, and administer a household. She learned how to care for the other young girls in the Frauenzimmer. She might also have been exposed to childbirth, something which sometimes occurred within the Frauenzimmer.

Anna carried on some of the traditions from the Frauenzimmer after her arrival in England. Once her marriage to Henry VIII was annulled, Anna was given her own household. There are anecdotes about her dabbling in cooking. Perhaps Anna enjoyed making food for herself and close members of her household, as she learned to do during her childhood and youth in the United Duchies. Anna’s upbringing was very different from her English counterparts, but should not be considered as inferior.

12 thoughts on “What was the Frauenzimmer?”