Juana la Loca, or Joanna the Mad, was the elder sister of Catherine of Aragon and sister-in-law to Henry VIII of England. Juana was born on 6 November 1479, a daughter of the formidable Isabella of Castile and Isabella’s husband Ferdinand of Aragon. Juana was known during her lifetime as Juana of Castile.  Juana married Philip von Habsburg, known as the Handsome, in 1496. Juana was 16 years old.  This union birthed the Spanish portion of the Holy Roman Empire through Juana’s and Philip’s sons.

Page from a choirbook for Philip the Fair and Juana of Castile (ca. 1504-6). Brussel, Koninklijke Bibliotheek, Ms. 9126; held by AlamireFoundation.org.

Juana went on to have six children with her husband, four girls and two boys. Both boys became Holy Roman Emperors as Charles V and Ferdinand I.  Juana’s four daughters married well, too. Eleanor married a King of Portugal and the King of France, Isabella married the King of Denmark, Mary married the King of Hungary and Bohemia, and Catherine married a King of Portugal. Mary was widowed at a young age, and went on to become her brother Charles V’s regent for the Low Countries during most of her life.

Juana was an intelligent young woman and, like her sisters, received a considerable education for the time-period. It was reported that Juana could speak the three main languages of the Iberian Peninsula, along with Latin and French. As a girl, Juana was expected to marry well. She was likely not taught anything about statecraft, military strategy, or politics. She was the third child of Isabella and Ferdinand, and the second daughter.

Wings from the Last Judgement Triptych of Zierikzee, by the Master of Afflighem, showing Philip von Habsburg and Juana of Castile c. 1500, held by the Royal Museums of Fine Arts of Belgium.

Juana was never expected to be Princess of Asturias, a title for the heir apparent to the throne of Aragon. This similar to the English title of Prince or Princess of Wales. It was never expected that Juana would become Queen of Spain. After all, Juana had two older siblings, her sister, Isabella and brother Juan. Juan sadly died in 1497 at the age of 19, possibly of tuberculosis. Isabella died in 1498. Juan’s only daughter was still born; Isabella died shortly after giving birth to her son Miguel. Miguel died in 1500 before he turned 2-years-old.

This succession of deaths quickly catapulted Juana to her new position. Juana’s husband Philip, perhaps somewhat insolently, declared Juana and himself Princes of Castile. This was seen as a slight to the memory of Juana’s recently deceased brother.  Juana’s mother, the formidable Catholic Monarch Isabella, passed away in 1504. This left the throne of Castile and Leon to Juana. She inherited the Kingdom of Aragon from her father upon his death in 1517.

In 1504 Juana started exhibiting signs of mental instability when her mother, Isabella, was stricken with a fever. As was seen throughout her lifetime, Juana was not eating or sleeping when her mother fell ill. After visiting with her mother, Juana wished to join her husband in Flanders, which would mean she would have to travel through France at a time when France and Castile were at war. When she was prevented from leaving for Flanders, twenty-four-year-old Juana flew into a rage. One must keep in mind that Juana was grieving the loss of her mother, whom she loved very much, and that Juana already had four children, the eldest of whom turned six years old on 15 November 1504, days before Isabella died on 26 November 1504. Juana’s behavior was later seen as a mark of mental instability.

Perhaps one of Juana’s most notorious, lurid displays of mental instability occurred when her husband died in September of 1506.  Already known to fly into jealous rages over her husband’s mistresses, even reportedly going so far as to attack at least one, Juana refused to part with her deceased husband for a disturbingly long time. Quite pregnant, Juana traveled with her husband’s body from Burgos to Granada, where he was to be buried. This is a distance of 668 kilometers, which would take 6.5 hours to drive in a car. Juana was said to have opened her husband’s casket to embrace him and kiss him. 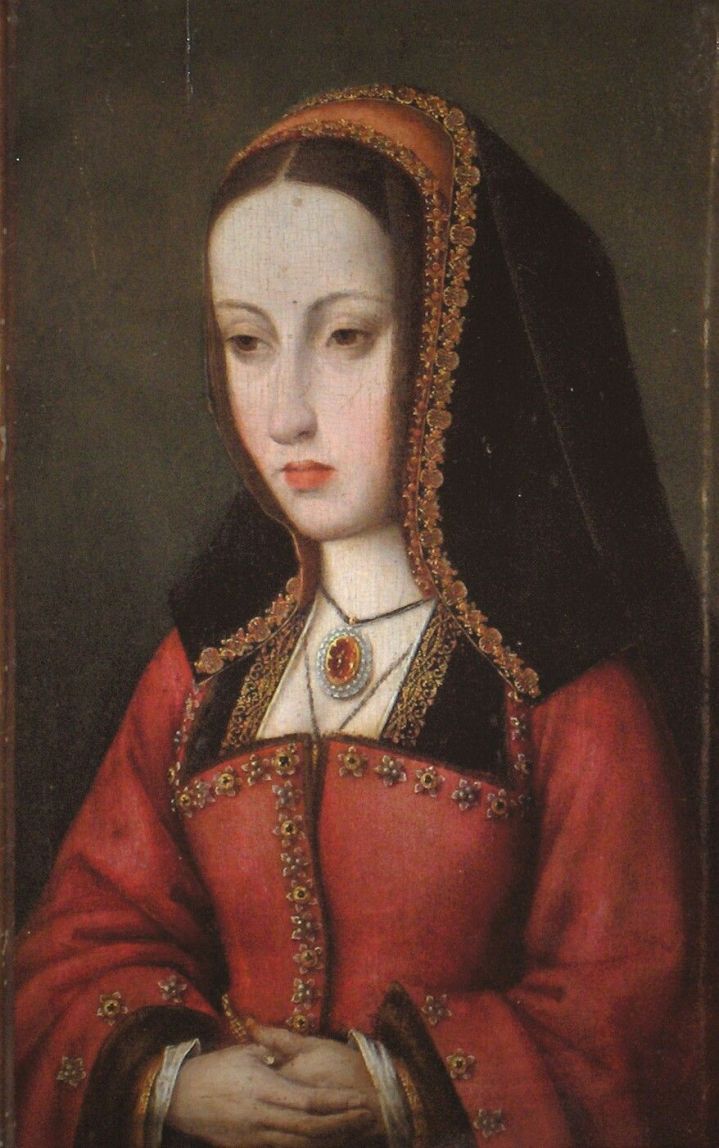 Unfortunately, Juana’s husband Philip spread rumors about her madness when he was still alive. Her behaviors after his death may have reinforced the rumors of her madness. Juana’s son Charles, who became the Holy Roman Emperor Charles V, eventually took over from Juana as regent, and then, king. In 1509 Juana was either placed in, or retired to, the Royal Monastery/Convent of Santa Clara in Tordesillas, Castile. Charles forbade Juana any visitors. She died in 1555, at the age of 75. Juana outlived all of her siblings, including Catherine of Aragon. Juana’s son Charles died himself in 1559, only a few years after his abandoned mother.

Was Juana truly mad? Was she undermined by her husband or son? Juana’s maternal grandmother, Isabella of Portugal, supposedly also suffered from mental illness and was sent to a convent. Juana’s grandson Carlos and great-granddaughter Maria of Austria, Duchess of Jülich-Cleves-Berg, reportedly also went mad. It is thought that Juana may have suffered from a wide range of mental illness, including schizophrenia and depression. However, it does seem that her behaviors escalated in response to the series of deaths her family experienced in the 1490s and 1500s. Juana’s siblings and nephew died in the later 1490s, her mother died in 1504, and her husband in 1506. Juana was frequently pregnant or recovering from childbirth throughout her short eight-year marriage, at a time when she was mourning the loss of her family members. On top of that, Philip was known to have many mistresses.

Both Philip the Handsome and Charles V had a lot to gain from Juana being declared unfit. She was also sent, or perhaps banished, to a convent by her son and not allowed any visitors for the rest of her life. So was Juana mad, or was she the victim of ruthless individuals in her life? What do you think?

8 thoughts on “Juana of Castile and Her Madness”