During the Elizabethan period, English privateers careened up and down the Atlantic coast of the Americas in an attempt to capture Spanish ships. One of the more famous privateers was Sir Francis Drake. Regarded as an all-out pirate by the Spanish,  Drake harassed Spanish ships wherever he found them. This included attacks in what is now Central America.

In 1572, Drake and a couple of his ships landed on the Isthmus of Panama. There Drake managed to befriend the Cimarrons, a group of freed, or at least rebellious, black slaves. The Cimarrons initiated contact with Drake in 1572 through a Cimmaron named Diego, who approached Drake’s ships and asked to be allowed aboard so Diego could speak with Drake. It was through Diego and subsequent meetings with the Cimmarons that Drake learned of a Spanish treasure hoard in Nombre de Dios, a city on the Caribbean, north side of the Isthmus of Panama. The treasure was bound for Spain.

On the night of 9 to 10 July 1572, Drake and around 70 men approached the city of Nombre de Dios in three small sailboats, called pinnaces. Under the cover of darkness, they crept into the city. Unfortunately, the surprise attack ended in failure. To make matters worse, Drake himself was badly wounded and no reinforcements from England were scheduled to arrive until 1573. Drake and his surviving cadre retreated.

Drake could not sail away from Panama because of armed Spanish ships patrolling the area. He decided to bide his time by building Fort Diego on Isla de los Muertos, also called Slaughter Island. The Cimarron community helped Drake build the fort, realizing that they had a common enemy in the Spanish. English reinforcements arrived in the area of Nombre de Dios in January 1573.

Drake was still resolved to get his hands on Spanish treasure before leaving. Drake was aware of a second Spanish city named Panama, which was on the Pacific, southern side of the Isthmus of Panama. Drake had two options for getting there; either sale all the way around Cape Horn, which was treacherous and would take weeks, or trek deep within the jungle to the Pacific coast. Drake opted for the latter, and set out with a small group of men 15 to 20 men. Their Cimarron companions number at least 25. The Cimarrons provided support during the venture, helping lead the way to the city of Panama.

The Cimarrons played a big role in guiding Drake’s party to Panama. They cut away the forest, helped collect food and water when necessary, and knew where other Cimarron towns were. Additionally, the Cimarrons helped carry English supplies and weapons through the thick jungle. Three days after setting out, the group came to a Cimarron settlement positioned on a hill above a river. 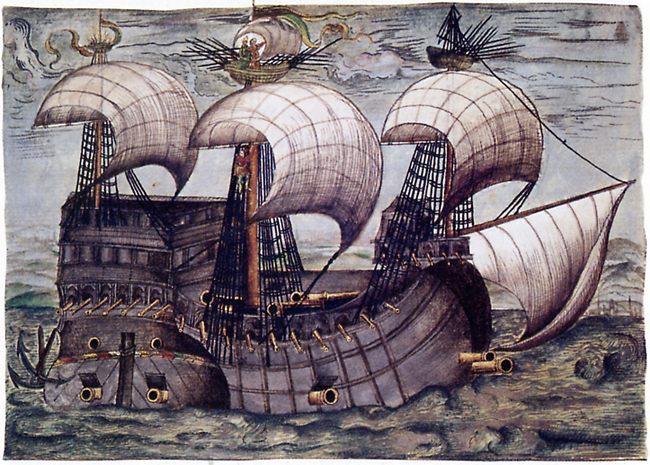 There were 50 to 60 homes in this particular Cimarron settlement. The inhabitants dressed in the Spanish style, wearing clothing and goods seized by them from the Spanish. A wide road went through the middle of the settlement. The road was sometimes used by the Spanish to transport goods via mule trains. The mule trains went between Panama and Nombre de Dios.

After staying in the settlement for a day or so, Drake and his group of Englishmen and Cimarrons continued on to Panama. Roughly four days later, the group espied Panama. Once Panama was in sight, a Cimarron spy was sent from Drake’s group to sort out the details of the next Spanish mule train. Intelligence in hand, Drake plotted to overtake the train that was leaving that day. The spy told Drake that several mules in the train were carrying gold, silver, and other precious items.

It was not long before the first mule train came in sight of Drake’s ambush party. Unfortunately, a handful of the over-zealous Cimarrons attacked the front of the mule train, which was not carrying anything of much value. The second mule train, which carried the precious metals and stones, hastily retreated to Panama. This left Drake with two choices, neither of which were very promising: trek back through the dense jungle to Nombre de Dios, or take the road to Venta de Cruces.

The idea of traveling through the jungle again was unappealing, so Drake, his men, and the Cimarrons took a chance on Venta de Cruces. Their attack on Venta de Cruces was met by Spanish troops. After eventually overcoming the Spaniards, Drake’s party and the Cimarrons managed to gather some loot. Unfortunately, most of it couldn’t be carried through the jungle back to Nombre de Dios, and was destroyed or abandoned. Almost certainly demoralized, they headed back to Fort Diego on the Carribean, northern side of the Isthmus of Panama.

Around 22 February, Drake sent a Cimarron ahead to the English ships. The Cimarron left at night, so Drake could not write out a letter to his crew. Instead, Drake carved on his gold toothpick, “By me Francis Drake,” which was then carried by the Cimarron to Drake’s captain. Eventually, Drake and his remaining party arrived back at the English-secured area.

Drake’s luck changed in March 1573, a couple months after he first set off to raid the city of Panama. While on expedition, a group of Cimarrons built a village nor far from Fort Diego, leading the Spanish to believe that the English intended to establish a permanent settlement there. Additionally, a French pirate named Guillaume le Testu met with Drake, and the two decided to retry the raid on Nombre de Dios. Testu gave Drake a sword which once belonged to Francis I of France as a sign of friendship.

The Cimarrons were not fans of the French pirates, but were loyal to Drake and the English.  The Cimarrons agreed to accompany Drake on his next raid of a Spanish mule train. The group of roughly sixty French, English, and Cimmaron marauders cut through the jungle toward Nombre de Dios. Once the party could see Nombre de Dios, they hid in the thick undergrowth and waited.

Eventually, a huge treasure train, with almost 200 mules, came into sight. The combined forces on Drake’s side overtook the Spaniards. This time, Drake was able to secure a large amount of valuable loot from the Spanish mule trains. Most of the silver that they took was buried by the Chagres River. The remaining party took as many bars of gold and other precious items as possible back to the ships. Unfortunately, one Cimarron died in the raid, and Testu was gravely wounded. Testu could not make the journey back through the jungle, so he stayed behind. The injured Testu was found by the Spaniards and slaughtered.

Once back in safety, the Cimarrons, French, and English divided up their booty. Before Drake left the Isthmus of Panama, he invited the Cimarron chief onto his ship. Drake told the chief to pick any piece of treasure he wanted. The chief picked the sword which Testu gave Drake. In exchange, the chief gave Drake some of his gold as a sign of good will.

Drake would never again be so successful on the Isthmus of Panama.