On 1 January 1540, Henry VIII surprised his new bride, Anna of Cleves. For centuries, it was believed that Henry VIII found Anna of Cleves ugly at worst and was not attracted to her at best. The main sources for this rumor were depositions specifically created for the annulment of their marriage. The depositions were taken in June and July 1540, just before the annulment went through. Additionally, Cromwell signed an attestation about the events of Henry’s and Anna’s marriage right after learning an Act of Attainder was passed against him; perhaps Cromwell was trying to save his life by agreeing to the falsified account of Henry and Anna’s relationship. It seems suspicious.

Thankfully, the Germans created their own account, written a few days after Anna and Henry’s first meeting. The German account has significantly different facts in it. The letter was sent to Anna’s brother Wilhelm. He and their mother the widowed Duchess Maria were likely eager to hear how the new Queen Consort of England was doing.

Below is an excerpt from, Anna, Duchess of Cleves: The King’s ‘Beloved Sister’, researched from the German perspective:

“Anna was resting at Rochester on 1 January 1540 when she was informed of a visitor. Anna had met many of her new subjects and was surely exhausted by the time she arrived in Rochester, and less attentive than usual due to her fatigue. Anna encountered hundreds of English people who were appointed to meet her, including numerous peers of the realm and their personal entourages. Perhaps she was spending some of her time at Rochester daydreaming about meeting Henry or going over how she would greet Henry in the English language. She would not have the opportunity to follow through with any of those plans.

Anna received that unexpected visitor on 1 January 1540, and the German and English accounts of the first meeting between Anna and Henry differ from each other. Olisleger, an eyewitness, dispatched a letter to Duke Wilhelm within a few days following the meeting. According to Olisleger, while Anna was at Rochester watching a bull-baiting with her German lords, Henry came to call on her after lunch with ten or twelve of his gentlemen. This presumably included Sir Anthony Browne, Henry’s Master of Horse, who was deposed at the annulment trial later on that year. It was New Year’s Day 1540, and the excited groom could not wait to meet his bride. Henry and his men were dressed as private persons. Henry entered the room and greeted Anna, which may have unsettled her. After all, Anna was used to the culture of the Frauenzimmer, so having strange men come into her presence without proper preparation could have caught her off guard.

Anna invited this private person, a representative of the King, to dine with her. Afterward, he presented Anna with a gorgeous gift ‘from the King’ for New Year: a crystal goblet, the lid and foot of which were completely gilded and inlaid with diamonds and rubies. Another golden band encircled the goblet, also with inlaid rubies and diamonds. Afterward, Henry and Anna enjoyed banqueting together. Henry stayed over to the next day, 2 January 1540, though at a separate location so as not to offend Anna’s virtue. He and his men broke their fast with Anna and her gentlemen. Henry then returned to Greenwich. Anna herself departed for Dartford with her train later that day. It is unclear at what point Henry made his identity known to Anna. Hall’s Chronicle described the meeting:

‘the king which sore desired to see her Grace accompanied with no more then [sic] 8 persons of his privy chamber, and both he and they all appareled in marble coats privily came to Rochester, and suddenly came to her presence, which therewith was somewhat astonied: but after he had spoken and welcomed her, she was most gracious and loving countenance and behavior him received and welcomed on her knees, whom he gently took up and kissed: and all that afternoon, communed and devised with her, and that night supped with her, and the next day he departed to Greenwich, and she came to Dartford.’”

The gilded cup is not mentioned in any English source. The claim of Henry delivering furs is absent from this account as well. While it is still possible that Henry could have brought a gift of furs and could have been disappointed by Anna such that he did not give her the furs, Henry gave no sign of it per the German account. What was really going on? Did Henry really find Anna ugly, or was that a manufactured tale so Henry could have his annulment? What were the major political issues surrounding the marriage? Why was Anna not allowed to have any of her German representatives present during the Convocation which ended her marriage? All these questions and the wildly different German account make the depositions of Summer 1540 seem to be made for one purpose: to get Henry out of a politically dangerous marriage. 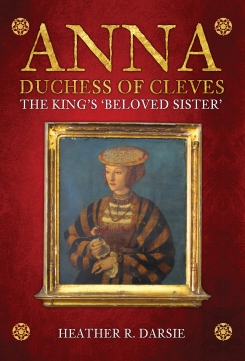 10 thoughts on “When Henry Met Anna: The German Account”